You are here: Home › Not The Democrats: Trump’s Own Family Turns Against Him 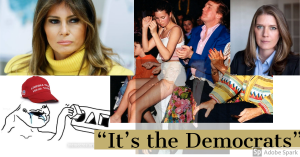 For the last four years, one has been forced to endure the constant rhetoric from Trump that “the Democrats” are trying to “thwart” what he wants to do. While it is true that the Democrat party has behaved publicly in reprehensible ways towards Trump that are completely devoid of charity and good sense, and indeed Trump at times has been mistreated, it is also true that many of Trump’s problems are either self-inflicted because of what seems to be a pattern of poor decision making, ignorance masquerading as intelligence, arrogance masquerading as leadership, or just outright lies on fundamental premises that he decided to change his mind about upon getting the Presidency. This is a major criticism of Trump that, while not attempting to ignore the positive things in his administration, goes too often ignored and needs to be addressed if one genuinely wants to see the success of his administration as well as the general welfare of the nation regardless of what political party one subscribes to.

According to two recent articles from Business Insider, reports coming from Trump’s own wife Melania and his niece suggest that there is a lot more taking place in the White House than “Making America Great Again.” According to a book released by Melania, she claims that she prevented Trump’s clearly power-hungry daughter and her highly-questionable, dishonest, and generally distasteful to the public appetite Jared Kushner from taking more power than what they already have.

n Melania Trump’s absence, Ivanka Trump, the president’s eldest daughter, was apparently jostling for influence. She sought to take over office space in the East Wing, the part of the White House reserved for the first lady, the new book said.

Ivanka Trump, who was appointed as an adviser in her father’s administration, even reportedly sought to rename the First Lady’s Office, through which the first lady conducts her public duties, to the “First Family Office,” but Melania Trump blocked it.

“With Melania away, Ivanka used the private theater, with its plush red seats, and enjoyed other White House perks,” Jordan wrote. “Some said she treated the private residence as if it were her own home. Melania did not like it. When she and Barron finally moved in, she put an end to the ‘revolving door’ by enforcing firm boundaries.”

A White House spokesman, Judd Deere, pushed back against the claims.

“This is totally false,” he told Business Insider. “The media is once again running untrue information from anonymous sources and not once did anyone fact check this with the White House or Ivanka Trump.” (source)

Business Insider also reports that Trump’s niece, Mary Trump, was the primary source behind the New York Times’ access to Trump’s finances and exposing how Trump’s “successes” are just a pile of bankruptcies.

Mary Trump, 55, is the daughter of Fred Trump Jr., the president’s older brother who died in 1981 at the age of 42 from a heart attack triggered by alcoholism.

Her book, “Too Much and Never Enough,” is scheduled to arrive August 11 from Simon & Schuster, three months ahead of the presidential election and days before the Republican National Convention.

People with knowledge of her book told The Daily Beast that it would be filled with “harrowing and salacious” stories about the president.

According to The Daily Beast, she will identify herself as the primary source for The New York Times’ 2018 Pulitzer Prize-winning exposé on the president’s finances by supplying her grandfather’s tax returns and other confidential financial papers.

The Times investigation had revealed that the president wasn’t a self-made man but had his father bolster his failing businesses in the 1990s with injections of more than $400 million in today’s dollars.

Mary Trump’s book will also allege that Donald Trump and his father played a role in his brother’s death by neglecting him when he needed their help, The Daily Beast reported. (source)

Now it is not an accident that such books are coming out in an election year, and there are clearly political motives for some of this. However, the fact that Trump’s own wife would criticize Trump’s daughter, and then Trump would not say anything but only have a White House representative deny the allegations with no further details is a concerning matter.

Married couples are intended to stand by each other through good and bad times. Trump may have been married multiple times, but this does not mean that Trump is exempt from his responsibilities. The fact that the man refuses to talk about these very serious allegations made by his wife, and that he spends an inordinate amount of time with his daughter (not to mention Trump’s relationship with Jeffrey Epstein, his comments about young girls, and many of the very interesting photos of him with his daughter Ivanka) suggests there are real problems in the White House and the Trump administration, and they are actually eating at the integrity of the family as well as the ability of Trump to function in his capacity as an elected leader.

Political cults may be expedient to putting a man into a position of power, but they are not helpful for addressing real world problems. The cult that has been built up around Trump is notably strong, but the fact is that there are a lot of problems in Trump’s administration as evidenced by his actions, and now by signs from within his own family.

If one genuinely cares about Trump and his ability to succeed as a president, one needs to remove the MAGA filter and instead of criticizing Melania or Mary Trump, ask if there may be something very serious taking place in his administration that needs to be addressed.