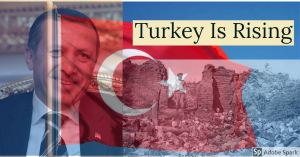 Shoebat.com has written for years that Turkey, not Iraq, Iran, or Syria, or even Saudi Arabia, is a real danger because Turkey is a historical imperial power who has always seen herself as such and has ambitions of glory and recovering what she believes to be her lost empire. Turkey has a history of violence, bloodshed, and invading her neighbors and committing horrendous atrocities against them in the name of religion as well as nationalistic pride.

Shoebat.com was laughed at by many for taking this position, suggesting that our concerns were rooted in ignorance or just fantasy. However, the Jerusalem Post reports that such concerns have been very much in order, as plans have just been exposed dating back to 2000 coming from the highest ranks of the Turkish government named after an ancient Turkish warlord to invade Greece and Armenia.

The documents cited were part of a PowerPoint presentation that was supposedly planned by the Turkish general staff for internal planning review.

Titled “TSK Çakabey Harekât Planlama Direktifi” (TSK [Turkish Armed Forces] Çakabey Operation Planning Directive), the presentation was dated June 13, 2014. According to the Nordic Monitor report, this suggests the plan was likely updated and finalized after a review of some earlier draft, and that the plan could still be active.

Also included in the same document were plans to invade Armenia, the operation in this case being titled “TSK Altay Harekât Planlama Direktifi,” which was dated August 15, 2000.

The documents were exchanged by top general staff commanders via a secure internal email system, the Nordic Monitor reported. They appear to have been accidentally leaked in a court case file in Ankara that prosecutor Serdar Coşkun submitted to the court as part of an investigation against the failed military coup against Turkish President Recep Tayyip Erdoğan in July 2016.

All of the general staff’s emails from the two months preceding the coup were seized by the prosecution.

The general staff had panicked over the possible leaking of the classified documents and urged the court to allow the documents to be screened before being presented. It appears, however, that the prosecutors ignored these concerns, the Nordic Monitor reported.

However, while the plans were named in the document, any specific details were omitted, likely being classified and therefore not shared through the network.

It is believed that the plans were prepared as a contingency regarding developments in Syria, wanting to maintain offensive and deterrence capabilities on the western front while moving troops, the Nordic Monitor reported.

The inspiration for the operation’s name, Çaka Bey, better known as Chaka Bey and Tzachas, was a Seljuk Turk military commander and ruler of an independent state based in modern-day Izmir. Chaka Bey was originally a commander in the service of the Byzantine Empire, but rebelled and began seizing power through conquest. At one point, he even declared himself Byzantine emperor.

Chaka Bey is a much revered figure in Turkey, with the Turkish Naval Command listing him as the first Turkish admiral and founder of the first modern Turkish navy, and even has a statue of him in their museum in Istanbul, the Nordic Monitor reported.

The revelations also come in the wake of renewed anti-Greek rhetoric on the part of the Erdoğan regime, which it has been scaling up since 2013, the report stated, giving the example of a March 2019 announcement publically supporting calls to convert the Hagia Sophia from a museum back into a mosque – which they announced as a response to US President Donald Trump’s recognition of Israeli sovereignty of the Golan Heights and east Jerusalem. The decision sparked backlash from Greece, with the building having a long history as a Greek Orthodox cathedral before being converted into a mosque following Ottoman conquest of the city. It was turned into a museum in 1935.
Greek Foreign Minister George Katrougalos criticized Erdoğan’s remarks at the time, saying: “Any questioning of this status is not just an insult to the sentiments of Christians, it is an insult to the international community and international law,” according the Middle East Eye.

They also come amid Turkey’s attempts to increase its sphere of influence in the region, including its involvement in conflicts in Syria and Libya. (source)

If you have not read Walid’s analyses on Turkey and the danger she poses, please go to the Shoebat archives and read them.

As nationalism rises around the world historical imperial powers like Turkey are going to attempt to assert themselves.

Turkey is the real power of the Middle East and the real danger. It is not the Arabs or the Persians, and without the American presence due to the influence of Israel as well as Saudi Arabia, it is a very reasonable proposition to say that Turkey would attempt- and may have already attempted -to invade both nations, remembering that it was the French and the English who were the original forces that broke Ottoman influence in the early 20th century.

If American power wanes in the Middle East- and it appears that may happen -the vacuum will be filled by Turkey.

Remember also that wherever Turkey goes, Germany also follows, and in the reverse. Germany and Turkey have been allies since the days of when she was pagan and Arian, and when Istanbul was still called Constantinople. Their union is very deep and while religion influences both it is not the main factor for either one, but rather it is power, and both have regularly attacked both the Church and committed genocide in the name of said pursuit.

Israel needs to be very careful. Shoebat.com has spoken both in praise and criticism of Israel as well as others, but all for the good will of people, because one must tell the truth if one is going to be able to give an honest evaluation of the situation. With public support against Israel in Europe and growing, and a lot of people in the US turning against her- not based on any sort of racial or religious hatred but rather serious problems of persistent abuse of laws and social rules to the point that society falls apart and chaos or perversions become normalized -she is going to find herself with no one to defend her country, and in spite of blustery claims and bold statements, there is no way that the IDF can stand up to the the eighth most powerful military in the world and win.

The future in the Middle East is going to become very interesting.

All Police Officers May Want To Seriously Consider A Career Change
If The Ones Destroying Statues Really Cared About Fighting Racism, Then They Would Get Rid Of The Theory Of Evolution
Follow