You are here: Home › All Police Officers May Want To Seriously Consider A Career Change 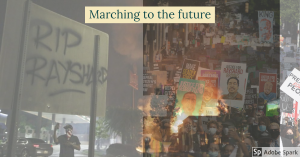 According to Reuters, Officer Rolfe of the Rayshard Brooks shooting appears that he will be prosecuted as news is being made about previous complaints.

The former Atlanta police officer who shot and killed Rayshard Brooks last week was previously reprimanded for use of force involving a firearm, according to records released to Reuters by the city’s police department on Tuesday.

The records show that Garrett Rolfe received a written reprimand in October 2017 for an incident involving a firearm in September 2016, his sole use-of-force complaint during his seven years on the force. No further details were disclosed. (source)

Likewise, Trump has also added fuel to the current combustible situation by saying that the incident was ‘very disturbing’.

President Trump on Monday called the shooting death of Rayshard Brooks by Atlanta police over the weekend “very disturbing” in his first public comment on the incident.

“I thought it was a terrible situation,” Trump said Monday during a roundtable event at the White House. “To me it was very disturbing.” (source)

I gave a previous analysis of the shooting here which you can read. To briefly review my points, as I have noted before, I have written for years about police brutality and the need for police reform and the problems with the justice system. That said, I treated this case no differently than I would have another case as to how I approach it, and based on the same criterion, I cannot say that Rolfe did anything wrong in his approach, and rather have to say that for an American police officer in the same situation, he was a lot more patient than others have been, and that Brooks’ demise was entirely self-inflicted.

The way things appear to be moving, Rolfe will probably have his life destroyed and may be imprisoned for decades. The future is unknown, but since many prosecutions and convictions are actually political in nature- even very small cases -the political situation works to his extreme disadvantage, and there is a chance that he may be made an ‘example of’, as American courts are infamous for doing.

Given this situation, and the serious anti-police attitudes that are being promoted and permitted- note that I have never said “no police” but rather honest reform and the holding of standards expected of citizens to those of men in police and government -there is going to be a strong trend of this for the foreseeable future.

There is a concern it may not be a short-term trend, but rather a longer one because it is a reflection of a combination of political, demographic, philosophical, ideological, and social changes that have been taking place for a very long time in the US. It is inseparable from the combined sum of all these factors, and one ignores them at his own peril.

As such, it is counsel to the wise that if one is a police officer or in another form of security/legal professions where one may be exposed to the effects of not per se Black Lives Matter, but the tensions on the basis of race and ethnicity right now being generated for a multitude of uses, that one needs to serious consider a career change lest one be unintentionally pulled into this conflict that is leading nowhere but straight into hell and massive social chaos throughout the country.

Basically, if you’re a cop, especially one who genuinely cares about people, and are in a major urban area, it might be a good idea to think about getting out in the next year. Going to prison because a mob of angry people who are demanding charges on the basis of their own racialism in the name of fighting racialism is not going to solve anything. It is going to create more chaos and ends only in death.