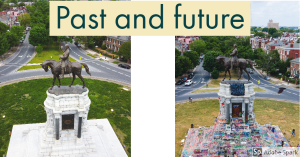 In a story reported by CNN and in something that bears a historically similar countenance to actions taken by the revolutionaries during the French Revolution, a statue of Confederate war general Robert E. Lee was defaced with pro-LGBT and BLM signs.

ctivists in Richmond, Virginia, projected the image of a pride flag and ‘BLM’ on a Confederate statue there Friday night in support of black LGBTQ+ rights.

The statue of Confederate Gen. Robert E. Lee has been the site of many protests since the death of George Floyd and is the same one currently in legal limbo after the governor’s order to remove it was met with a lawsuit.
After multiple protests, the statue has been covered in multicolor spray paint with phrases like “Black Lives Matter” and “Stop White Supremacy.”

Earlier this month, Gov. Ralph Northam announced he would remove the statue honoring the Confederate general, calling it “wrong” during a news conference.

His effort has currently been stalled by a county circuit judge.

The Lee statue is the largest of several monuments on Monument Avenue in Richmond that honor Virginian Confederate veterans of the Civil War. (source)

Left-wing Fanatics, Right-wing anger and the rise of Western Violence
All Police Officers May Want To Seriously Consider A Career Change
Follow