You are here: Home › Poll: Americans Are Unhappier Than Ever 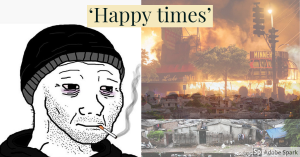 Happiness can mean a lot of things for different people, and one cannot expect to please everyone. However, a recent poll as reported by the AP declares that Americans are unhappier than ever right now and these rates are the highest they have been at in 50 years.

It’s been a rough year for the American psyche. Folks in the U.S. are more unhappy today than they’ve been in nearly 50 years.

This bold — yet unsurprising — conclusion comes from the COVID Response Tracking Study, conducted by NORC at the University of Chicago. It finds that just 14% of American adults say they’re very happy, down from 31% who said the same in 2018. That year, 23% said they’d often or sometimes felt isolated in recent weeks. Now, 50% say that.

The survey, conducted in late May, draws on nearly a half-century of research from the General Social Survey, which has collected data on American attitudes and behaviors at least every other year since 1972. No less than 29% of Americans have ever called themselves very happy in that survey.

Most of the new survey’s interviews were completed before the death of George Floyd touched off nationwide protests and a global conversation about race and police brutality, adding to the feelings of stress and loneliness Americans were already facing from the coronavirus outbreak — especially for black Americans.

— The public is less optimistic today about the standard of living improving for the next generation than it has been in the past 25 years. Only 42% of Americans believe that when their children reach their age, their standard of living will be better. A solid 57% said that in 2018. Since the question was asked in 1994, the previous low was 45% in 1994. (source)

If one is unhappy right now, it will be interesting to see what happens when a second wave of COVID-19 comes, or when other conditions develop so to that the economy becomes a lot worse and poverty shows notable increases, and the results then compared.

That would be interesting to see.