You are here: Home › US Navy Busts Ring Of American Sailors Trafficking And Enslaving Thai Women In Bahrain 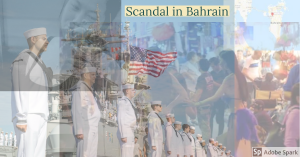 It is a well-known fact that sex slavery is a huge problem in the Middle East. This includes Israel as well as Muslim nations, and it has been a serious issue for years. Many times the women come from Eastern Europe, Southeast Asia, or sub-Saharan Africa (in that order) and are sold by their families to pay debts, and they will be forced to work for years as prostitutes, with some not surviving. It is a horrific scandal that continues to this day.

While many people often times point to wealthy Arab oil sheikhs as the culprit, this time a new sex-trafficking scandal emerged in the small Muslim nation of Bahrain but not involving Muslims from the Middle East, but American Naval sailors going up into the ranks of senior officers who worked to traffick women from Thailand and place them into sex slavery, collecting a share of the profits from their illegal venture as is being reported by the Military Times.

For years, U.S. sailors and prostitutes have lived, drank and slept together near “American Alley” in the Juffair section of Bahrain’s capital, Manama.

This warren of bars, nightclubs and apartment blocks sits just outside the gates of Naval Support Activity Bahrain, the headquarters of U.S. 5th Fleet, where about 7,500 American sailors are stationed to oversee naval operations across the volatile U.S. Central Command region in the Middle East.

Yet by 2017, sailors were not just patronizing prostitutes. The NCIS investigations revealed a shadowy subculture outside the gates of NSA Bahrain that had metastasized into multilayered enterprises with sailors as profiteers. The misconduct flew in the face of the Pentagon’s anti-trafficking policies and attendant online training programs that troops from all services must regularly complete.

Some evidence suggests the involvement of U.S. sailors was widespread. One accused chief told NCIS agents in 2018 that he believed up to 15 percent of sailors assigned to Bahrain were housing prostitutes in their off-post apartments.

“He stated many other sailors do not think you can or will actually get in trouble for patronizing prostitution or hosting foreign nationals,” in their off-base residences, a NCIS summary of the interview states.

That chief, who told NCIS agents he had patronized 10 to 15 prostitutes in Bahrain in 2017, said he “knew several of the women he paid to have sex with were engaged in debt bondage, owing their ‘mamasan’ approximately 2,500 [Bahraini dinar, or about $6,600], for coming to Bahrain,” one NCIS report states.

According to NCIS records, another sailor told agents that “service members have been housing women for profit since at least 2012, when he was previously stationed in Bahrain.”

That service member — whose name was redacted in the records NCIS released publicly — told agents that, “Sailors would typically hold (the women’s) passports to ensure they received money owed to them.” (source)

The pattern of enslavement noted is absolutely no different than what one could read about from they many tales of people trafficked by Muslims and Balkan, Russian, or Israeli gangs. The difference was that it was US soldiers this time, which is a tremendously scandalous and embarrassing thing to be caught in.

Slavery never disappeared, but takes different forms depending on the age. In the Shoebat archives, we have recorded how modern slave trafficking is not just tied to incidents such as the current refugee crisis with migrants from African to Europe, but also how the “dark net” has become a notable source of buying and selling people around the world.

There is no military that is free from scandals, and the litany of jokes about navies and sailors and their various excursions or experiences with prostitutes exist because they are all too common. that said, it does not justify the practice, and given how the US has come under intense international scrutiny as well as there are nations looking to supplant or lessen her position in the world- such as Germany, Russia, or Turkey -the last matter that the US needs is another scandal at this time. Perhaps that is the reason why, although this happened in 2017 and did not finish until recently, it is being discussed- that by discussing it now and admitting what happened, the problem can be more effectively dealt with, instead of attempting to “hide and deny” only to cause another scandal later, such as what infamously happens with the Russians.

However, there is one curious detail in the story, that one can read further down, which is that the main madame/mamasan, Lin Raiwest, was also acting as a paid informant from the US Navy for at least four years, including while this entire scandal was going on.

But likely unbeknownst to her American acquaintances on the island, Raiwest had been an NCIS informant since 2014 and is designated under the code name MEBJ-1580 in agency and court records.

So while she continued her work as a prostitute and mamasan, Raiwest could also if needed turn to NCIS Special Agent Stanley Garland, the agent whom she’d known and secretly worked with for years.

“This is a calculating individual that knows what she’s doing and knows how to play this game,” Pristera said in court in 2018. “NCIS just kind of lets her do her own thing.”

How much NCIS paid Raiwest over the years remains unclear, but records show agents paid Raiwest $900 after searching Littlejohn’s apartment in September 2017 and finding her passport locked in a safe there.

“This was a woman who was…very powerful,” Pristera told Military Times. “She was using that relationship [with NCIS] and taking full advantage of the fact that she had NCIS as a silent partner, almost.” (source)

This is another scandal. One can point to the soldiers, but the fact is that this scandal would have never happened if this woman was not stopped immediately. Instead, the government paid her and allowed her to keep doing what she was doing, effectively leaving her available to create the very scandal that happened.

One may recall that the infamous Hal Turner, a public figure and “white nationalist” who called for violence against non-whites and was put on trial in Connecticut in 2009 for attempting to incite violence against public officials was exposed in the courtroom as a paid FBI informant for years. Likewise, recall how Shoebat.com reported by was of Reason magazine that a minimum of 25% of child sexual abuse websites were run on FBI computers, and 42% of such websites were run on DoD servers- meaning that arguably, two-thirds of all of the child sexual abuse and violence material on the darknet is actually not being put out by the “average” man, but is actively being sustained and promoted by the government that proclaims to oppose such.

This should be a lesson to all as to why it is always, without question, a bad idea, to get involved in criminal activity. It does not end well, it causes problems, and many times, it is just a trap to destroy a man, if not from a more powerful individual or group, than from the demons that want to enslave the souls of men and put them into a spiritual prison without any hope of liberation from Christ.

Scientists: Two Hundred Thousand Will Be Dead Of COVID-19 By October
Deutsche Bank: ‘One-Third Chance’ A Disaster Worse Than COVID-19 Will Happen
Follow