You are here: Home › Deutsche Bank: ‘One-Third Chance’ A Disaster Worse Than COVID-19 Will Happen 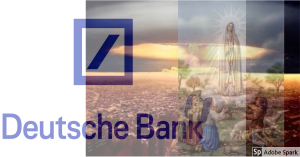 Shoebat.com has extensively criticized major banks because, as the adage goes, ‘with great power comes great responsibility’, and since banks control the means of exchange between nations, they have the power to control whole countries and the future of the world. Naturally, they are going to be subject to more scrutiny than most other groups.

Likewise, such banks also are excellent sources of information because they provide insights into social trends and life since they are forced to be aware of them due to the fact that they are in contact with the goings on of society with the common man up to the rulers in power, and so have the perspective of a broad spectrum of events that give them a fuller picture of what is ‘really happening’. It is because of this fact that when a banks starts acting strange or making statements that sound odd, especially a major bank, it is something to take note of since it may be a sign of something serious in progress,

Following this advice, Marketwatch.com reports that Deutsche Bank has taken the extraordinary step of releasing a curious prediction, that there is a ‘one-third’ chance this year that a disaster worse than COVID-19 happens.

Analysts, led by Henry Allen, say there is at least a one-in-three chance that at least one of four major tail risks will occur within the next decade: a major influenza pandemic killing more than two million people; a globally catastrophic volcanic eruption; a major solar flare; or a global war. (The current COVID-19 pandemic has killed 443,765 globally already.)

If the time frame is two decades, then there is a 56% chance of one of these disasters occurring, the analysts say, based on various studies and risk assessments. Earthquakes were omitted from the numbers on the grounds that they are more local events.

The solar flare possibility is one rarely discussed, perhaps because the last severe one was in 1859, but the Deutsche Bank team finds that to be more likely than a major global war.

“There could be major power outages as electrical power grids are disrupted, which in turn would have knock-on effects throughout the economy as critical infrastructure is unable to be run properly. Lives could be lost if it impacted hospitals and medical care. Communications would be disrupted, many payment systems would be dysfunctional, and GPS [Global Positioning System] satellites would face extensive interference, to the detriment of all the individuals and industries that rely on accurate location services, not least aircraft,” says the cheery report. (source)

The fact that Deutsche Bank, a major German investment bank, has actually made this statement, given the current global conditions, means that something is very, very wrong.

Ted, Walid, and I can all also assert such. We would not say ‘one-third’, as we do not have a particular metric that we can give in a numerical way, but we can say that our observations and forecasts agree in the essence of what Deutsche Bank is saying. This is what we have all been striving to warn you, the general public, about for a very long time, and will continue to do so as a part of our mission to educate and inform the public.

We have been saying it, and will say it again, there is a very high chance of a major global war in the next ten years. The reason I emphasize the next ten years is because, if you read the Shoebat archives, ten years equates to warnings giving by Our Lady of Fatima that dovetails with the revelations of Our Lady of Akita that says that if man does not stop sinning, the world will experience another deluge by fire along the lines of what happened in the days of Noah, and the timeline given suggests a date of such around 2029.

People many times ask “what can be done”, but we have already given the answer, and that is, to care for yourself and your needs so you can best help those around you. Ted recently gave an example of this in a video showing his garden and how he cares for plants.

This is what we speak of. The problems in society right now are very serious and the individual man will not be able to solve them. However, he can make good decisions by working with those around him to support each other and in so doing, to be able to set himself and those near him up to maintain stability in a world that is preparing to go mad and be able to help others as well.

The future is now. Get ready while you are still able to.