You are here: Home › Did An American Company Just Do Something That Used To Happen All The Time In The USSR? 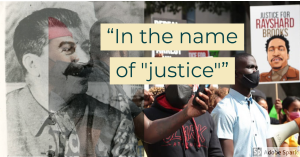 According to FOX News, the stepmother of Officer Rolfe, who is at the center of the Rayshard Brooks shooting case, has just been fired from her job under unclear circumstances.

The stepmother of the Atlanta police officer who fatally shot Rayshard Brooks was fired from her job as human resources director at an Atlanta-based mortgage company for allegedly violating company policy and creating an uncomfortable working environment for fellow employees.

Melissa Rolfe, the stepmother of former Atlanta police officer Garrett Rolfe, “lost the confidence of her peers, leadership, and many employees who no longer felt comfortable engaging with her,” a statement from Equity Prime Mortgage said. Fox News’ “Tucker Carlson Tonight” broke the story on Thursday night.

The company said it values “diversity of thought” but “when those views create a hostile working environment, we must make difficult decisions and part ways.”

A source close to the matter told “Tucker Carlson Tonight” that Rolfe received no explanation, other than: “We have to terminate our relationship with you.” (source)

I have said before that I knew a lot of people growing up from the former USSR and her various satellite nations. I heard many stories from them and was able to get a good insight, as much as one can, from their experiences as to how life was.

One of the stories I remember was that of a family I knew well who came to the US in the late 1980s but filed to leave in the late 1970s, taking about ten years before their paperwork was finally processed, and not without a considerable amount of trouble. According to these people, when the filed the paperwork to come to the US with Soviet officials, the next week the head-of-household was suddenly fired from his job, the whole family was removed from their current flat to a much poorer one, and a small article ran about them in the local newspaper about how they were ‘traitors’ to the USSR and that it was a horrible thing they would attempt to file to leave the USSR because life was so ‘wonderful’ there and only a bad person would want to leave.

Eventually they got out. They said their experience was not abnormal, and such happened consistently to people who tried to file to leave the USSR. It would result in harassment, unemployment, often times a period of homelessness, and insults in the state-controlled media.

Now I am not saying this is exactly what happened in the above story. We don’t know the full details, and at this point, with all of the arguments coming from all sides, it is too noisy (in the metaphorical sense) to ‘hear’ both sides objectively.

However, when I saw this story and the curious circumstances behind her firing, and how from what I have been able to find there really is not a clear explanation as to what ‘policy’ was violated, and that her biggest claim seems to be her relationship connection to Officer Rolfe, I cannot help but think back to this story from the USSR and wonder- are we seeing something that used to happen in Soviet days take place in modern times?

Right now it is an open secret that in spite of the claims about “equality” and “freedom of speech”, you do not have that in the corporate world, for having any sort of “wrong think” is enough to get a man fired under a diversity of excuses because it ‘makes the company look bad.’ This is a real danger for Christians with hot-topics such as the LGBT issue, which is one of moral necessity to take a strong position on yet if one says so much publicly in criticism of this particular bloc one is almost guaranteed to lose his job as well as face prolonged social ostracism from friends, family, and the assurance of long-term unemployment since in spite of all of the claims about ‘equality’, only certain types are enforced in the workplace while other kinds are not.

Right now, it is quite clear that people who express opinions that are less-than-flattering of the recent events outside of a specific context are considered to be legitimate targets for social anger. In the case of Melissa Rolfe, that is what appears to be happening- for while it must be said that one still is not clear on details -it is curiously co-incidental that that Officer Rolfe is her stepson, and now she finds herself curiously unemployed for ‘violations’ that are not clear from her employer.

If one thinks what is happening right now is bad, consider how recently the courts ruled that LGBT activity is a protected class under the 1964 Civil Rights Act. This opens up a huge number of legal issues, especially for employers. For those who have any critical opinions? One could find himself, in the name of ‘civil rights’, being unemployed and unemployable permanently.

The culture war is over. Christians lost, they lost in a huge way, betrayed frequently by their own, and they are not going to have any real say in the affairs of the country for a long time. Norms of the ‘old world’ will become those of the ‘new world’, but likely with a greater and more deadly means of implementation.

The concept is greater than the potential situation with Officer Rolfe’s stepmother. This is about a concept such one may be seeing in this but also other cases is the codification, albeit unspoken, of a series of behaviors that if one does not adhere to them one will be case out, ostracized, and prevented from even becoming or being allowed to become again a member of society. It is a form of imprisonment without bars enforced by the citizenry, which one may argue is the most pernicious kind since it is done in the name of patriotism and a false sense of justice.

Destroying Statues: Icons And Their Significance
Trump “Furious” After “Major Failure” Of A Rally
Follow