You are here: Home › Echos Of the Early Twentieth Century As Turkish Planes Bomb Christian Villages And Christians Flee 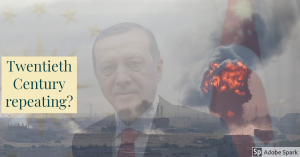 Turkey was once one of the ancient homelands of Christianity, but after centuries of war with the Turks and finally culminating in the Genocide of the early twentieth century, Christianity for all practical purposes no longer exists in Asia Minor. It is gone, and while there are some Christian villages left and Christian peoples, they are very small and the people are timid while surrounded by the Turkish majority, of which many do not like them and some have even alluded to committing genocide against what is left.

Now it is among these circumstances that a report has come out that Turkish fighter planes have been bombing Kurdish territory in which, according to Asia News, Christian villages were also targeted, causing Christians to flee for their lives.

This is what Chaldean archbishop of Amadiyah-Zakho, Msgr. Rabban al-Qas, reported commenting on the Turkish attacks against Kurdish Pkk-related targets of the last few days on the border between Turkey, Syria and Iraq.

“Many Christian families – continues the prelate – according to some rumors up to 300, have found refuge in some houses and churches in Zakho”.

Over the weekend there were new bombings in Iraqi Kurdistan by Apache fighters and Turkish air force helicopters, also documented by some videos posted by Christians in the area on social media (click here for the video).

In the images you can hear a family man who, in Aramaic, addresses his children saying to them “Do not be afraid, do not be afraid, plug your ears” in an attempt to placate their tears.

The villages of Chalik and Bersiveh in the northern mountainous region of the country are targeted. Dozens of families have fled the area, where there are at least five civilians killed in the context of the “Tiger’s Claws” operation launched on June 14 by Ankara against PKK militants, whom they regard as terrorists. “Among Christians – explains Msgr. Rabban – some are injured, fortunately slightly.

There was also one victim in the ranks of the Turkish army: a soldier who died in hospital from injuries sustained during the gunfights with the Kurdish rebels. The Turkish defense minister confirms the news but does not report the exact place where the fighting between the two fronts would have taken place. To date, two Turkish soldiers killed in the clashes.

Meanwhile, on the diplomatic front, the Turkish ambassador to Iraq announces that the operation will continue until the rebels are defeated and Baghdad expels members and affiliates of the Kurdish Workers Party from its borders. A war scenario reminiscent of the years between 1980 and 1990, when the conflict ended up destroying hundreds of Assyrian-Chaldean Christian villages in southeast Turkey (and northern Iraq).

Msgr. Rabban al-Qas says the Turkish army and their president Recep Tayyip Erdogan are acting like “terrorists”, regardless of the suffering of the civilian population and the protests of the Iraqi Kurdistan authorities. “Erdogan wants to hit the Kurds” underlines the prelate and nothing seems to stop him in this escalation which risks having heavy repercussions for the whole region. Christians and Muslims are being targeted and many “people are fleeing” in front of Ankara’s “conquest plan”.

“I have heard – continues the bishop of Amadiyah-Zakho – of a Christian cemetery at the gates of the city of Zakho that was hit. The landslides caused by the bombs brought the corpses out of the tombs, terrible scenes”. In some mountain villages, the prelate concludes, “most of the people fled in fear of being hit by Turkish bombs and missiles … the fear is great!”. (source)

Turkey has not changed her ways, and given the clear desires which Erdogan has shown and which Shoebat.com has continued to report that she is taking steps which suggest a desire to revive the Ottoman Empire, part of this may involve “finishing off” what few Christians are left. This does not include the refugees, which are in a grave danger of being killed in the name of a sort of nationalism mixed with a type of historical revisionism in a Turkish context.

The situation for Christians there is not good, and fleeing to Europe is also not a good option either, for if one experiences abuse at the hands of the Turk, in Europe it may come at the hand of the nationalists. It is a situation that is very difficult, and unfortunately, appears to be another case of history repeating herself again.

We Should Build A Statue Of Santa Anna In Front Of The Alamo, For Historical Reasons
Report: Dollar May Deteriorate Quickly
Follow