You are here: Home › Report: Dollar May Deteriorate Quickly 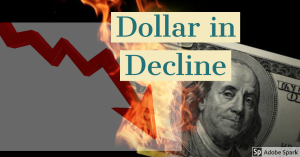 Growth and decline share a relationship in how they function. Change does not happen gradually as people say, but the steps to change happen slowly and the transition takes place quickly, much like exponential growth in mathematics. It starts slow but once an inflexion point is reached, the growth (or transition) is immediate and drastic. Hence this is the reason why it appears that change happens in the wink of an eye- because it does, but the factors which caused it had been building up for a long time. It is also the reason why change causes such a shock to individuals- because it does not appear to be expected in spite of the fact that it was long in coming unless that person was aware of the circumstances that lead up to that change.

When somebody grows, it looks like they ‘grew overnight’. As with when a man declines, it appears the same but in the opposite.

As such, it is of interest that according to Marketwatch, there may be a massive decline in the dollar coming soon.

Stephen Roach, a Yale University senior fellow and former Morgan Stanley Asia chairman, tells MarketWatch that his forecast for a sharp deterioration of the U.S. dollar could be a very near-term phenomenon, not an event that looms off in the distance.

“I do think it’s something that happens sooner rather than later,” the economist told MarketWatch during a Monday-afternoon interview.

His comments come as the financial expert has been warning for weeks of an epic downturn of the buck that could signal the end of the hegemony of the greenback as a reserve currency — an event that would ripple through global financial markets.

“In a COVID era everything unfolds at warp speed,” Roach told MarketWatch on Monday.

Roach is calling for the dollar to soon decline 35% against its major rivals, citing increases in the nation’s deficit and dwindling savings. (source)

This is not just about COVID-19. This is how all decline happens.

I do not know if we will see it this year. It may not happen until a few years from now. But I have said for years- YEARS -that the value of the dollar WILL go to zero because of the systematic changes taking place in the economy due to debt and overprinting.

We seem to be actively manufacturing a Weimar-type situation- with some modern differences and peculiarities to the American situation that accord to the times -but still the same in essence, that the value of the currency is being reduced to nothing,

This is not a new phenomenon, as one can argue the currency has been in decline since the establishment of the Federal Reserve Bank. However, the fact is that the currency has only gone into steeper decline and it is not getting any better and cannot recover value because, as many have noted, the Federal Reserve Bank is based on debt, the debt is the problem, and it cannot be solved because the bank was made to have debt be paid with more debt. There is not enough money in the world to ever pay off the Federal Reserve- it was meant to collapse from its inception. We are just at the historical point where this becomes a more likely chance than, say fifty years ago.

This is also why I have said that it is important to look at spending and savings, and to pay off as much as possible while also taking care for personal needs, because the economy is not getting better.

When the dollar does decline, it is likely to happen very rapidly. It will catch people by surprise, triggered by an unexpected “event” that will leave many shocked, and those who spent their lives saving money will find themselves in horror at how all of their hard work has been reduced to much less than what it was before.

What we are seeing is the destruction of the “saver” class, and the transfer of wealth from those people to the extremely wealthy and powerful coupled with the mass impoverishment of many. This is a lot of like what happened in the USSR, and whose effects are still felt even to this very day. Poverty will be rampant, a lot of people will be out of work, and as bills will likely be forced to stay the same, the situation will not become one that one can life oneself out of, but is forced to sit in without the ability to escape.