You are here: Home › US Spending Continues To Dive As Well As The Economy 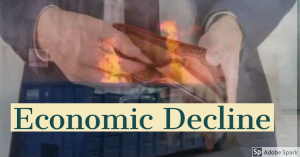 ‘Spending drives the US economy’- this phrase is key to understand ALL US economic “growth” since the 1970s, or the last fifty years. One cannot understand it outside of this because the economy has, while producing, been based not on production, but consumption through manipulation of the means of production by way of fraudulent practices with money and debt.

The was bound to end by force at some point, and according to the Wall Street Journal, as the effects of COVID-19 continue to ravage the economy and destroy what is left of people’s spending power, the government is trying to get people to spend money that they do not have but cannot because even the average consumer is ‘tapped out’. As a result, the economy is stagnating badly, and is falling apart. It’s the idea of the wheel that stops moving- once it stops, its very hard to get it started again.

Spending by Americans with the lowest incomes has registered a far bigger bounce since the worst of the Covid-19 crisis than spending among the better off. That recovery may prove fleeting.

The drop in spending that started in mid-March, as worries about the novel coronavirus pandemic became widespread, was swift and devastating. An analysis conducted by nonpartisan research group Opportunity Insights of credit- and debit-card data collected by Affinity Solutions shows that by early April, spending by U.S. consumers had fallen 33% from January levels. Then starting in mid-April, when many Americans began receiving stimulus payments, things started picking up. As of June 17, spending was off by just 8.9%.

Considering that low-income workers have been hit hardest by the crisis as restaurants, hotels and other service-industry businesses laid off workers in droves, the recovery in spending among poorer Americans is striking. It speaks to the power of the stimulus spending the federal government enacted in response to the pandemic, including one-time payments to most households, the addition of $600 to weekly unemployment checks and the expansion of unemployment insurance to cover self-employed and gig-economy workers. (source)

This brings up another question- will the government, in an attempt to ‘stimulate growth’ give another stimulus check?

I have noted this before, because given the economic changes, the political scene, and how Trump’s actions (such as putting his name on the stimulus checks by order and sending letters to each person who received one) suggests he is favoring policies that essentially propose to have him “buy” the election through giving away Treasury monies. This is at a time of how concern about the economy is seriously eroding confidence in Trump and threatening his re-election.

But this will not stop the decline. Instead it is a “stop-gap” for an inevitable fall, of which it seems attempts are being made to delay the inevitable. However, once the spending does stop, it is not going to pick up again for a very long time.

What we may be looking at here, as many have suspected, is a sort of economic ‘death cycle’ where one decision, like a wheel turning, leads to more of the same actions. For a long time, the US was able to live on credit, but now that all of this is drying up and the inevitable consequences of debt are coming around, and given that she cannot pay, it is going to create a cycle of devastation that will annihilate the consumer and just worsen the already difficult situation that has become the current business environment.