You are here: Home › The US Takes Almost As Many Migrants By Rate Per Year As Germany And Russia Do Combined 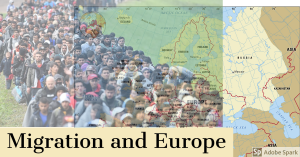 Ever since the “refugee crisis” of 2016, which Shoebat.com has discussed in thorough detail and has noted is not merely a population transfer scam as evidenced by multiple reports, but appears to be being employed in order to foment the rise of nationalism in Europe and to bring about the conditions for a Third World War as a long-term goal. .If this is the case, it has so far been used effectively, as “migration” has been used as a rallying cry across Europe for supporting ultranationalist goals.

It is not just in Western Europe either where this is a problem. In Russia, the migration of Central Asian people has been quietly taking place, with a lot of people in government intentionally ignoring but also noting that it is causing major changes in Russia that may be long term.

But how does migration actually compare with the rest of the world? In other words, how many people are coming versus leaving as compared to other nations?

In order to take a closer look at this, I went to the CIA Factbook for the net migration rate. Net migration rate compares the difference between the number of persons entering and leaving a country during the year per one-thousand persons.

Interestingly, there were only two European nations on the list in the top ten, and these were the tiny nations of Luxembourg and Monaco (the latter is more accurately likened to a city-state). Since these are so small, there may be question as to if they accurately represent the larger changes in a European context.

The only two major European nations on the list were Spain and Sweden at 7 and 5.2 respectively (persons coming per thousand) in the top twenty-five, with Belgium just coming out at number 26 with a rate of 4.8. Switzerland, Norway, Ireland, Austria, Iceland, and Italy followed at 4.6, 4, 3.9, 3.6, and 3.2 respectively up to spot #36. However, the thirty-seventh spot was reserved for the United states, with a rate of 3.

That is correct. The US accepts three migrants per thousand people each year.

Now one may ask, where does Germany and Russia place on that list?

In this contest, the two nations fall even further behind, with Russia occupying the 52nd and Germany the 54th spots at 1.7 and 1.5 persons each arriving per thousand.

These numbers mean that the US, as a nation, accepts almost double the rate of migrants that Russia and Germany do combined.

Greece, which has been vocal about the migrant crisis, has a rate of .9, or nine people for every ten thousand Greeks.

Likewise, one also has to consider the Total Fertility Rate (TFR), which I have discussed extensively at Shoebat.com. The rates for all of Europe are no higher than France’s at 2.06, (noting the minimum needed to sustain a population is about 2.12), and this is driven by migration. “Native” European birthrates continue to collapse all across the continent as all of this is happening. By comparison, the US TFR for 2020 is 1.84, driven largely by Hispanic migration.

These rates are all very important to consider with the current immigration-as-a-political issue.

There is a lot of concern about migration and the effects of migration on European society, but as the numbers suggest, the problem is not merely “the migrants”, but rather is, as with many things, a self-inflicted issue.

It is true that people migrate. However, the rates of migration are much lower than what the US has across much of Europe. When one takes into context the fact that the native European populations are barely reproducing and that their fertility rates are being driven by migrants, this gives an entirely new perspective.

Europe is not “dying”. To the contrary, she is committing suicide, and while one can argue the reasons for why this is the case, the fact is that most of the damage has been self-inflicted (hence it is why I say ‘suicide’). Her situation is not necessary, and it also does not have to be a tragedy. In fact, the way to fix the problem is very easy, which is to have a family. However, this becomes a problem is nobody wants to have a family or people are too selfish to, if not “lower their standards” for another, to make the personal sacrifices necessary for society to continue. If one does not want to do that, society will die.

One can argue about migrants “invading” all that one wants. Aside from the fact that they were both invited and in many cases, trafficked in by the government themselves (and as such in both cases not ‘invaded’), and likewise tend to have children, the rate of migration suggests there are not as many coming in many cases as people fear. Rather, it is the fear of an “invasion” of people into the lands that the very same people who complain about the migrants refuse to populate because of their own decisions that is a major factor in how the growth of tribalism has been able to happen.

It is common to find memes about European culture and history talking about how it is a special thing. However, if one believes that one has such a thing, the next natural question must be, why is nobody seeking to pass on their heritage through family? One cannot say “this is the migrants’ fault” because there are not hordes of migrants running around with guns and knives who randomly rape women at will. This is a problem that begins in societies and since society is a macrocosm of the family, a family problem that people do not want to resolve but seem rather to want to blame others for.

The Bible makes clear that God wants man to “be fruitful and multiply”, and that while each group of people has different charisms and challenges, that all men are made in the image and likeness of God, and that God’s favor rests not with a particular tribe by generation but with the one who does His will. This is a warning and counsel to all peoples as to the wage of sin and the mercy of God.

It is important to talk about the good and bad behaviors in all, migrant and non-migrant. However, the issue of ‘migrant invasions’ is often a lot different than the reality, which is that one is hearing political propaganda meant to justify the worst sort of tribal behavior while selectively ignoring one’s own vices that one projects onto another.

Covid-19 Spikes, Millions Of Olive Trees Infected With Disease, Unrest In The Cities … Are We Spiraling Downwards Ready For Judgments?
Twenty-Eight Rescued Migrants At Sea And Brought To Sicily Found To Be Infected With COVID-19 Coronavirus
Follow