You are here: Home › Twenty-Eight Rescued Migrants At Sea And Brought To Sicily Found To Be Infected With COVID-19 Coronavirus 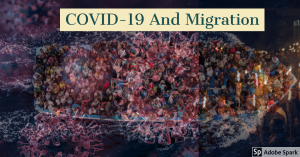 The Turkish Anadolu Agency reports that twenty-eight recently rescued migrants from sea while traveling to Europe have been found to be infected with the COVID-19 Coronavirus.

Twenty-eight migrants on board a quarantine ship off the Sicilian port of Porto Empedocle have tested positive for coronavirus, Sicily’s governor Nello Musumeci said in a Facebook post on Wednesday.

This is the first reported case of multiple coronavirus infections among migrants rescued in the Mediterranean since the beginning of the outbreak, and is set to reignite a heated debate over Italy’s migration policies.

The 28 migrants who tested positive are now held onboard ferry Moby Zaza, off Porto Empedocle, where they are undergoing a mandatory quarantine.

They are part of a group of 211 rescued by a German NGO’s ship Sea-Watch 3, which on Sunday arrived at Porto Empedocle after resuming search and rescue activities in the Channel of Sicily.

The handling of the flow of migrants reaching Italian ports — mainly from the Libyan coasts – has fueled political divisions, with the right-wing opposition insisting on the need to stop their arrivals.

Local communities have expressed worries that migrants arriving in poor sanitary and health conditions could spark new clusters and further spread the virus, which hit Italy hard and claimed almost 35,000 victims so far.

Sicily’s governor was also among the supporters of special quarantine measures to be applied before disembarking migrants.

“Now our request can be better understood,” he wrote on Facebook, rejecting earlier accusations of racism. “In the next few hours sanitary measures will be necessary, based on the principle of precaution.”

Sea-Watch responded in a statement that all the necessary medical checks and sanitary protocols had been strictly followed before transferring the migrants.

It stressed that many of the rescued people come from detention centers in Libya, where they suffered “inhuman conditions” and where COVID-19 cases have doubled in the last few weeks. (source)

The COVID-19 pandemic is everywhere. There is no avoiding it. However, what makes it more dangerous is when politics is added. Given the explosive situation with migration in Europe, adding disease to this only worsens the potential political impact, as people will be seen less as people than they already are, but as a sort of “monster” for which any force against them will be considered to be justifiable.

This is something that we at Shoebat.com have been warning about, and it will be interesting to see how the public responds. In particular, we will be watching the response of Matteo Salvini, since this is in Italy, and Italy was not only a center of major “stay behind” operations against the Soviet Union (by way of the whole Gladio network), but has been a major voice in the current “migration crisis”.

The issue here really is not about migrants. It is about the perception of migrants, and how that perception can and likely is going to be used to bring about revolutionary conditions, and most likely at the expense of the migrant, for it one remembers the words of Professor Jason Jorjani, who was tied to the Alt-Right movement and has been profiled before at Shoebat.com, he noted that there is a likely chance a war will happen that will lead to the deaths of hundreds of millions of migrants.

The US Takes Almost As Many Migrants By Rate Per Year As Germany And Russia Do Combined
Who Is The Girl In The Video?
Follow