You are here: Home › Who Is The Girl In The Video? 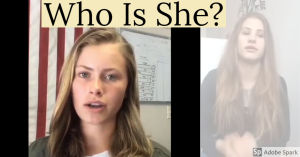 A new video is going viral on Twitter of a teen girl who is ‘angry’ about Black Lives Matter, ‘never-trumperism’, and other ‘conservative’ issues that have been recently criticized.

The HYPOCRISY is Unbelievable! 💥

In January 2016, when the refugee crisis was at a fevered pitch in Europe, there was a video that appeared from a woman calling herself “Bibi Wilhailm”. The woman, who was about sixteen to nineteen and spoke in German, made a whole monologue about the refugees, the danger they posed, and begged men to “stand up” for women like her against them.

This is the video. It went viral around the world, and was very popular among the right.

I remember covering this story. However, there was one problem that I could not fix- who was “Bibi Wilhailm”?

I spend hours- days – looking for information about her, and I could find nothing. There was not a shred of evidence that existed to substantiate who she was, where she lived, who her family was, or even a tangential connection to this person’s existence. The only proof of her existence was that video. For four years I have on occasion continued to look for information about this person, and I still can find nothing.

This is a major concern, because she was calling for men to “stand up” in a way that could become violent, yet nobody knows who she is. It is kind of like the band “Blink 1488”, which made a series of alt-right National Socialist songs that were very popular during the 2016 campaign for President Trump. Nobody has been able to find out who these people are, where they came from or where they went to.

This is what concerns me about this video that is going viral on Twitter- just like “Bibi Wilhailm” or “Blink 1488”, we have no idea who this woman is or where she came from, or anything at all about her.

I have been looking for information. If somebody has a good link to information, please email us. However, there is nothing more that I can find about this video. Yet, just like the Wilhailm video, it shares certain characteristics:

The main difference between this video and the Wilhailm video is that in the Wilhailm video, she was asking “German men” to “help.” In this video, the woman takes on a Tomi Lauren type approach, with a “strong” and “smart” and “sassy” woman with an aggressive personality as she speaks and (often) complete with an America flag flying in the background. One can compare videos.

Who is this person? We have no idea, and we may never will.

This is one of the great dangers of today. People are using anonymnity- and groups as well as other entities -to incite others to violence and then these same people mysteriously ‘disappear’ almost under the same type of circumstances.

It does not matter if some points in such videos are true or not. What matters is that the information being used is not for the purpose which it is being presented, but a more sinister one. This is the same reason why Shoebat.com, while having origins in the discussions about Islam, does not and has continued not to limit discussion about topics to just that, since not only it is a way to over-compartmentalize oneself, but it is also a way to become a willing or unwilling instrument in the hands of manipulators who do not care about your good will, but are going to use it for their own profit or that of another.

Twenty-Eight Rescued Migrants At Sea And Brought To Sicily Found To Be Infected With COVID-19 Coronavirus
Medical Professionals Agree: We Are Undercounting Coronavirus Deaths
Follow