You are here: Home › “Free Money” Is Turning Into Higher Taxes All Across The Country 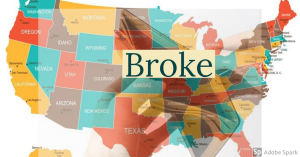 A lot of people were happy to get the “free money” the Federal Government was “giving away”. However, free things always come with a price, and the Greenwich Times reports that for many cities, taxes are probably going to be raised.

Cash-starved cities and states across the country are starting to weigh whether to raise taxes on homes, cigarettes, local businesses and global tech giants, hoping to rake in new revenue that might help them close the massive budget shortfalls created by the coronavirus pandemic.

The increases that have been proposed – and in some cases adopted – reflect the growing desperation on the part of government leaders nationwide. Many have found that recent spending cuts, furloughs and layoffs haven’t been enough to shore up their sagging finances, forcing them to consider more politically noxious and economically risky moves in the middle of an economic crisis.

“Given the size of the problem, they’re going to have to use every tool at their disposal,” said Elizabeth McNichol, a senior fellow specializing in state fiscal issues at the Center on Budget and Policy Priorities, a left-leaning think tank. “That includes spending cuts and revenue increases.” (source)

The ultimate problem is that there is no solution at all. The problem is entirely, without question or exaggeration, unsolvable because of the debt that cannot be paid.

It is really simple- too much was borrowed, knowing it could not be paid back, and the name of the game for the last seven decades was to see how far the inevitable consequences of irresponsible behavior could be delayed until a reckoning would be forced. This is the nature of the situation that we find ourselves in today.

There is no answer because there is no money, and there was never enough money to ever pay off the debts. What is happening today was known about for decades. It was going to happen because of simple mathematics.

Raising taxes will do nothing except further impoverishment. If people cannot pay their bills now, what is going to happen when taxes on basic needs go up? It will just pay for immediate bills- like the usury on the debt at best -rather than the debt itself.

The only answer at this point is for a currency collapse, either by disowning debt or through hyperinflation .Both will end in disaster, and with the loss of the dollar as the world reserve currency.

That is why the world is being dragged to war. It is about the long-term preservation of the dollar as a world reserve currency for political manipulation, as this is the source of American power.

Normal math does not work because there is no logic to the financial calculations outside of preparing the conditions for war by rampant spending and complete chaos. It is a total mess, there is no order, and is basically a free-for-all right now.

In a situation such as this, generally speaking, the beast thing to do is to take what one can get to weather the storm, and then just hunker down as much as possible until equilibrium returns, which will not be for a long time.

For Years We Have Heard About How The Left Wants To Persecute Conservatives, But Now Republicans Are Leading Conservatives To Their Deaths
Report: Weather Extremes As One Of The Coldest Places On Earth Hits Record-Breaking 100 Degrees Fahrenheit
Follow