You are here: Home › Almost Half Of The US Is Out Of Work 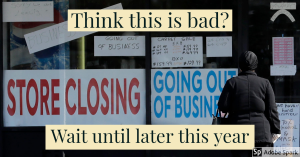 Having a job is a very important responsibility in the US because if one does not have money, one cannot participate fully in society. The reality of a “pay-to-play” system is serious, and the less money one has, the less one can partake of it. It is of great interest then that recent numbers show of the total working population of the US, only 52.8% have a job in the lowest numbers since the end of World War II.

Yet another statistic points to the alarming rate of unemployment Americans are experiencing.

The Federal Reserve Bank of St. Louis reports that just 52.8% of the population that can work actually has a job right now. This stat, referred to as the employment to population ratio, is the lowest it has been since the bank began collecting data in 1948.

The coronavirus pandemic wiped out millions of jobs as Americans stay at home or limit social gatherings to prevent the spread of the virus. The Labor Department estimates Americans have filed 47 million unemployment claims in the last 14 weeks, surpassing the number of claims filed during the Great Recession.

In April, the unemployment rate spiked to 14.7%, per data from the Bureau of Labor Statistics. Broader measures of the data estimate true unemployment could be as high as 22.8%, reaching the all-time-high estimate of 25% unemployment during the Great Depression.

The hospitality and travel sectors had been hit particularly hard by unemployment: 8 million restaurant workers have been laid off or furloughed, and experts predict 50% of all hotel jobs could be eliminated by the end of the pandemic.

Even as some restaurants and stores reopen, state guidelines mandate they open to less than full capacity so that patrons can social distance. The result could indicate that the 18.9% of Americans working in retail and food service could get permanently laid off from their jobs, per data from the University of Washington.

As unemployment stimulus checks are set to expire by July 31 (even while reported coronavirus infections continue to climb), American workers could face an impossible decision: risk contracting the disease on the job or be unemployed. (source)

Keep in mind that these numbers are skewed too because for a long time, families either lived together, jobs tended to pay more, and one did not have the effects of women and constant migrations, the latter two which have more than doubled the size of the labor pool without contributing additional work for those seeking it to the same pool.

This is appearing to form into exactly what I feared, and I likewise gravely fear that things are going to get much worse. People are desperate, and with rising unemployment, people are going to find themselves broke, with no way to pay for basic necessities of life, and as a result seeing their worlds collapse.

I cannot over emphasize how serious this is. The psychological effects- forget about money -will drive a man to madness on their conditions alone. When one sees one’s belongings be forcibly sold off to pay debts, as well as families shatter and lives destroyed, it is going to be awful.

This is not a time to say “I told you so”, because while people have been warned, it is important to show compassion and help as one is able to. However, this also does not mean to help somebody to the point that one is unable to care for oneself and is dragged into the same situation as the rest of the society, for that is not helpful, but foolish behavior and arguably is a form of suicide. One must as I have continued to note work with one’s neighbors and family, and all towards the same objective, of weathering the current crisis, which is not going to last months, but years.

If you still have a job, be very thankful, and if somebody else is having trouble finding a job, try to help him if possible. There is no man in the country who will escape the effects of this crisis, and just as the Bible commands men to be good to the migrant, the fact is that people- migrant and citizen -are being forced to ‘migrate’ in so much that people are being displaced unrighteously from their jobs and are trying to find their way amid a new social paradigm, and it is going to be very hard for them.