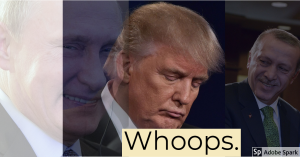 I have said before, and I will not stop emphasizing that regardless what one thinks of Trump, given the situation by which he was elected, he was given an opportunity of history to make a real and good difference for many. I do not believe anybody who wants to speak objective about his legacy can say this, just as if a Democrat was in the same position as Trump was but for his own context.

The accursed scandal that has become the Trump presidency is that in spite of being given such a wonderful opportunity, Trump has clearly wasted it, instead making the presidency into a reality TV show rather than real leadership. The recent law he signed mandating federal employment prefer experience to degrees was probably the most “MAGA” thing he has done yet, for the rest of his actions have served only to advance US isolationism and let loose the chains that kept historical war dogs under control, creating the conditions for a major war in the future.

Now in a story released by CNN, there is data that has emerged about Trump’s phone calls in which he is said to have been trying to play favors with dictators while insulting friends and allies, and all for the inflation of his personal ego.

In hundreds of highly classified phone calls with foreign heads of state, President Donald Trump was so consistently unprepared for discussion of serious issues, so often outplayed in his conversations with powerful leaders like Russian President Vladimir Putin and Turkish President Recep Erdogan, and so abusive to leaders of America’s principal allies, that the calls helped convince some senior US officials — including his former secretaries of state and defense, two national security advisers and his longest-serving chief of staff — that the President himself posed a danger to the national security of the United States, according to White House and intelligence officials intimately familiar with the contents of the conversations.

The calls caused former top Trump deputies — including national security advisers H.R. McMaster and John Bolton, Defense Secretary James Mattis, Secretary of State Rex Tillerson, and White House chief of staff John Kelly, as well as intelligence officials — to conclude that the President was often “delusional,” as two sources put it, in his dealings with foreign leaders. The sources said there was little evidence that the President became more skillful or competent in his telephone conversations with most heads of state over time. Rather, he continued to believe that he could either charm, jawbone or bully almost any foreign leader into capitulating to his will, and often pursued goals more attuned to his own agenda than what many of his senior advisers considered the national interest. (source)

Some may say “Well, this is CNN so it is just fake news.”

But given Trump’s behavior, and how he has acted in ways that are more of a child or a petty person than an actual leader in spite of his blustery talk (one can see this dichotomy through his Twitter posts), it is not unreasonable that this story, if not all of it, is actually true.

Trump has demonstrated that he talks big but really does not seem to know what he is doing. His biggest failure has been his refusal to honor major campaign promises in even a tiny way. Many people genuinely trusted him not because they have bad intentions, but like with Obama, they believed he would make a difference.

Trump’s rallied are pitiful because people hate him. This is why his poll numbers keep dropping, and why I expect there may be funny things that happen at the polls this year, for I find it difficult that even with the current situation and Biden as a Democrat nomination, people will willingly vote Trump in.

This national crisis should be a moment of triumph and glory for Trump- it usually is for leaders, as they love national crises to make themselves look good. Trump by contrast has not done that, but he has made himself look awful, and it is not the fault of the “media” or anybody else because people are angry at his actions, not his person.

Trump has not made America great again. He has made her protectionist and inclined to isolationism again, and this serves no one’s benefit.

Almost Half Of The US Is Out Of Work
Why Not? Now Scientists Are Talking About A New Swine Flu Strain For A Second Pandemic
Follow