You are here: Home › Dutch Doctor Who Forcibly Euthanized Patient Against Her Will Declares She Would Do It Again 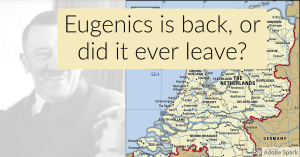 Holland is known for her support of eugenics by way of euthanasia. This is a tremendous scandal, but according to a recent story from Dutch News, a doctor who was acquitted of murder after euthanizing a patient against her will said that she would do it again.

he doctor who was cleared of murder for carrying out euthanasia for a seriously demented woman has for the first time given an interview on what she did – and why she would do it again.

Marinou Arends, a retired geriatric doctor who worked in the Mariahoeve care home in The Hague, told Nieuwsuur television programme that she had no idea that her actions would lead her to be facing jail and she still believed they were ‘for the best’.

On April 22, 2016, she gave euthanasia to a 74-year-old woman with advanced Alzheimer’s who had been admitted to the care home seven weeks before. The woman had two advance directives making it clear that she never wanted to be put in a care home with dementia, and wanted euthanasia when she felt ‘the time was ripe.’

But although the woman repeatedly said she wanted to die, when asked directly, she would then say ‘not yet’. A second specialist agreed she was ‘suffering unbearably’ in the home and in the end, Arends put a sleeping drug in her cup of coffee; when the woman later appeared to sit up and draw back from the lethal infusion, her son-in-law pushed her down in her bed again.

This so-called ‘coffee case’ caused outrage in the Netherlands and abroad when it became public – with many doctors signing a newspaper advertisement saying they would not administer a drug secretly for ethical reasons – and was the first euthanasia case to go to the High Court. Arends was completely exonerated, and a formal censure which had been given by a medical board was expunged.

‘I believed that her suffering was truly awful and I knew that it could last for a long time,’ she told Nieuwsuur. ‘If you asked her: “What would you think if I were to help you to die?”, she looked bewildered and said: “That’s going a bit far!” I saw in her eyes that she didn’t understand it any more.’

Although it is not required by the letter of the law, doctors’ organisation the KNMG had considered it good practice to confirm that a dementia patient still wants euthanasia before the moment of death – even after all other strict requirements have been fulfilled. Concerns had been growing about what to do if someone was no longer mentally competent to make this decision, and the public prosecution said it brought a case against Arends to get more legal clarity.

‘It is good to get the confirmation: do it, just do it,’ acknowledged Arends, who said she had asked the patient three times and had a negative reply. ‘But I couldn’t get this confirmation, and without it I had to take this step. It was tremendously difficult, but for the best. I believed I was working within the boundaries of the law.’ (source)

We have been reporting at Shoebat.com that eugenics is rising again in Europe, and the fact is that it never died, but just went dormant.

A lot of people get mad at the Muslims and Africans who were invited (not invaded) to these nations, but what can be said about a country obsessed with murdering the elderly and unborn, for this is what euthanasia is?

Holland is not so much dying from any sort of “invasion”, but because of their own actions. A refusal to reproduce in combination with a desire for selfishness and then advocating murdering babies as well as telling the elderly and even people who want it to kill themselves, and now with doctors murdering people, is not a society that has a future.

One can say what one wants about the Muslims and Africans, and there are many legitimate criticisms. But one must ask, where are the Muslims and Africans who are propagating eugenics such as this in these nations? This is not to say that such ideas do not exist among some of them, but rather when one looks at them, one does not immediately or even commonly see such things, but rather people having families and otherwise living generally as people have done throughout history.

This is the crossroads we find ourselves at, and it goes nowhere good. The Dutch do not want to change their philosophy, and because of this, many would rather see the deaths of innocent people to maintain the status quo rather than a real conversion. With the rise in nationalism, the push will not be for euthanasia, but rather for public eugenics, as the mentality for eugenics is already present, but only needs to have the right conditions in society to be taken to a further end.

Hence is it why I have continued to warn, if one is a migrant in Europe, please leave now- this is not about ‘racism’ or discrimination, but because one does not want to be made a pawn in a game of geopolitics.

Why Not? Now Scientists Are Talking About A New Swine Flu Strain For A Second Pandemic
Wuhan At The Center Of Another Massive Scandal, This Time Involving Gold Fraud
Follow