You are here: Home › Wuhan At The Center Of Another Massive Scandal, This Time Involving Gold Fraud 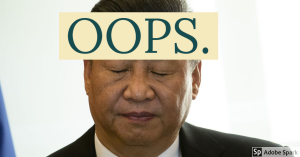 Wuhan has become a center of infamy following the spread of COVID-19 from a lab there under what seems to be, although it has yet to be formally confirmed, a military experiment gone wrong. If that was not bad enough, Zero Hedge reports from CaiXin Global that Wuhan may be at the center of another scandal, this time involving fraudulent gold bars.

In retrospect, it probably meant “copper” future, because as a remarkable expose by Caixin has found, more than a dozen Chinese financial institutions, mainly trust companies (i.e., shadow banks) loaned 20 billion yuan ($2.8 billion) over the past five years to Wuhan Kingold Jewelry with pure gold as collateral and insurance policies to cover any losses. There was just one problem: the “gold” turned out to be gold-plated copper.

Some more background: Kingold – whose name was probably stolen from Kinross Gold, one of the world’s largest gold miners – is the largest privately owned gold processor in central China’s Hubei province. Its shares are listed on the Nasdaq stock exchange in New York (although its current market cap of just $10MM is a far cry from its all time highs hit when the company IPOed on the Nasdaq around 2010) . The company is led by Chairman Jia Zhihong, an intimidating ex-military man who is the controlling shareholder.

Well, apparently everything as at least some of 83 tons of gold bars used as loan collateral turned out to be nothing but gilded copper. That has left lenders holding the bag for the remaining 16 billion yuan of loans outstanding against the bogus bars. And as Caixin adds, the loans were covered by 30 billion yuan of property insurance policies issued by state insurer PICC Property and Casualty and various other smaller insurers.

The fake gold came to light in February when Dongguan Trust (one of those infamous Chinese shadow banks) set out to liquidate Kingold collateral to cover defaulted debts. As the report continues, in late 2019 Kingold failed to repay investors in several trust products. To its shock, Dongguan Trust said it discovered that the gleaming gold bars were actually gilded copper alloy.

The news sent shockwaves through Kingold’s creditors. China Minsheng Trust – another shadow banking company and one of Kingold’s largest creditors – obtained a court order to test collateral before Kingold’s debts came due. On May 22, the test result returned saying the bars sealed in Minsheng Trust’s coffers are also copper alloy.

And with authorities investigating how this happened, Kingold chief Jia flatly denies that anything is wrong with the collateral his company put up. Well, what else could he say…

As Caxin notes, the Kingold counterfeiting case echoes China’s largest gold-loan fraud case, unfolding since 2016 in the northwest Shaanxi province and neighboring Hunan, where regulators found adulterated gold bars in 19 lenders’ coffers backing 19 billion yuan of loans, or about USD $2.5 billion. In that case, a lender seeking to melt gold collateral found black tungsten plate in the middle of the bars.

In the case of Kingold, the company said it took out loans against gold to supplement its cash holdings, support business operations and expand gold reserves, according to public records. It then appears to have decided to apply a gold-layer to tons of copper and pretend it was money-good gold collateral. And even more shocking, for years nobody checked the authenticity of the pledged collateral!

In 2018, the company beat a number of competitors in bidding to buy a controlling stake in state-owned auto parts maker Tri-Ring Group. Kingold offered 7 billion yuan in cash for 99.97% of Tri-Ring. The Hubei government cited the deal as a model of so-called mixed-ownership reform, which seeks to invite private shareholders into state-owned enterprises. But Kingold has faced problems taking over Tri-Ring’s assets amid a series of corruption probes and disputes involving Tri-Ring.

After obtaining the test results, Minsheng Trust executive said the company asked Jia whether the company fabricated the gold bars: “He flatly denied it and said it was because some of the gold the company acquired in early days had low purity,” the executive said. In a telephone interview with Caixin in early June, Jia denied that the gold pledged by his company was faked.

The gold market (silver too) has been the subject of much scrutiny for the artificial suppression of prices in it for years by way of dollar printing as well as the printing of gold contracts (contracts representing promises to pay a certain amount of gold, but not necessarily having the actual physical gold to fulfill contract orders). It is said that once the fraud is fully exposed, for a time, gold prices will explode along with silver.

What China appears to have been caught doing again could force, if not now, then in the future, this price suppression to be exposed because if China is selling gold and the quality of the gold cannot be trusted, all gold will be subject to examination. Likewise, investors may demand physical gold instead of paper contracts, fearing that China, one of the largest gold holders in the world, may be actually bluffing about what she really has or does not have.

At the very least, this is another huge black eye for China, who is now going to have the image of her an a dangerous, irresponsible, dishonest nation that is bad to do business with reinforced.

China is in the middle of not just a health crisis, or even an economic crisis, but a credibility crisis, which is more dangerous than both, because if people do not believe that she is worthy of dealing with, who will buy her products, and how can she have allies in a war? She cannot, China knows this, and it does not bode well for her for the future.

At the same time, as I have noted, given the instability of the dollar, the value of tangible goods such as metals, and that a war is coming, events such as this in combination will, in the future as the economy of the world becomes more unstable, will likely create a strong opportunity for those invested into them before a future crisis happens will benefit as people seek to embrace ‘safe investment’ havens.