You are here: Home › US Debt Rating Ranked Negative 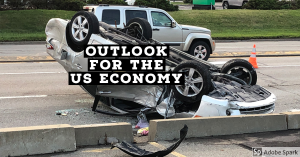 Debt is not a good thing, but it is often classified by financial corporations on the ability of the borrower to pay back his debt. For a long time, the US was ranked as being very credit-worthy. However, this has not been the case sine the Reagan administration, whose massive debts that he created have only continued to grow. Now with the current state of financial affairs in the US being exposed because of COVID-19, companies are finally being forced to admit to the general public what was always known in secret for decades, which as Bloomberg by way of MSN News reports is that the US has a negative credit rating with a negative outlook for the future.

One of the world’s major credit-rating companies fired a warning shot regarding the U.S.’s worsening public finances on Friday, just as lawmakers in Washington contemplate spending more to combat the economic fallout from the coronavirus pandemic.

Fitch Ratings revised its outlook on the country’s credit score to negative from stable, citing a “deterioration in the U.S. public finances and the absence of a credible fiscal consolidation plan.” The country’s ranking remains AAA.

“High fiscal deficits and debt were already on a rising medium-term path even before the onset of the huge economic shock precipitated by the coronavirus,” Fitch said. “They have started to erode the traditional credit strengths of the U.S.”

Unemployment has skyrocketed and the U.S. economy just notched up its worst quarter on record, with pandemic-related shutdowns helping drive an annualized gross domestic product contraction of 32.9% in the three-month period through June. And with infections still spreading rapidly in many states, the virus’s damaging impact on output looks set to continue.

Support from Congress has buoyed the economy in recent months, but further action will be critical in determining the path toward recovery. Crucial lifelines for jobless workers, like an extra $600 in weekly unemployment benefits, are expiring, and lawmakers have made little progress on agreeing to another stimulus package.

But while further measures — if settled on — could help support the economy, they would also likely add to the nation’s debt pile and worsen the fiscal deficits that caused Fitch additional concern. There is, however, no sign yet of a deal as upcoming elections for the presidency and Congress help sharpen partisan divisions.

General government debt is expected to exceed 130% of GDP by 2021, Fitch said, noting that the U.S. had the highest government debt of any AAA rated sovereign heading into the current crisis.

“Financing flexibility, assisted by Federal Reserve intervention to restore liquidity to financial markets, does not entirely dispel risks to medium-term debt sustainability, and there is a growing risk that U.S. policy makers will not consolidate public finances sufficiently to stabilize public debt after the pandemic shock has passed,” Fitch said.

The U.S. central bank this week reiterated its promise to use all its tools to support the recovery, keeping interest rates near zero and noting that the economy’s path is “extraordinarily uncertain” in the face of virus risks.

Fitch’s warning, just as the U.S. Treasury is preparing to release its quarterly financing plans next week, comes even as borrowing costs fall to unprecedented levels. Nominal yields on Treasuries are close to historic lows, while the real rate on 10-year debt — which factors in the impact of inflation — fell to around minus 1% on Friday.

Yet even with an assumption that real rates will remain negative and support public debt, and the credit assessor’s view that America’s debt tolerance is higher than other AAA sovereigns, Fitch has become less optimistic about the U.S. outlook. (source)

This warning should be of great concern. It means that because the US cannot pay her debts, she may default. However, as the former Federal Reserve Bank Chairman Alan Greenspan said, the US can pay any debt she wants because all she has to do is print the money to pay it.

The warning to this is that if she does this, it will destroy the dollar and drive its value to that of the paper it is printed on, which would crush people who save their money in bank accounts, and would be a move symbolic of what happened in Weimar Germany during the 1920s.

If one believes the government would not do this, consider that in the last COVID-19 stimulus check, it was 40% of the entire US budget for 2019, just the previous year, and the next stimulus bill will likely generate the same result. If she is willing to do this, then there is no reason that at some point, the US might simply print stimulus until the currency hyperinflates, but not without having a political excuse to blame it on before doing this.

This is why I warn people, get ready right now while you still can. Pay down debts, purchase useful provisions, and prepare to ride out the economic story that is coming for the next five to ten years. This is just the beginning, since economic problems lead to political problems, but for now, one must have enough money saved to service debts while also being able to position oneself to survive and thrive through the current economic climate.

Human Nature Proves The Trinity And That God Is Three
If Trump Actually Bans TikTok, He Deserves To Be Called A “Boomer” And A Fool
Follow