You are here: Home › Fools March On UK Streets Encouraging Nationalists To Violence 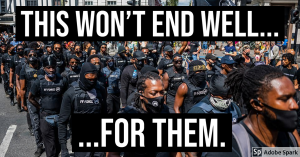 People can do smart things. They can also do really dumb things with consequences that because of a lack of forethought could seriously hurt them in the end. One such example of the latter happened this week in the UK when black protesters marched on the streets of London in military-style costume demanding reparations and shouting ‘F*ck the police’ according to the UK Daily Mail.

Hundreds of demonstrators brought Brixton to a halt as they marched through London to mark Afrikan Emancipation Day.

The coalition of action groups – led by Stop The Maangamizi: We Charge Genocide/Ecocide and the Afrikan Emancipation Day reparations march committee – took the drastic action to ‘make themselves heard’ in a bid for reparations from the UK government.

Among the groups of people marching were one group, dressed in black and equipped with what appeared to be anti-stab vests. One protester was wearing a balaclava, while another, angrily confronted police officers telling them to f*** off.

The Metropolitan Police said three people have been arrested during this afternoon’s demonstration.

Deputy Assistant Commissioner Laurence Taylor in charge of the policing operation today said: ‘The gatherings today have been largely peaceful and we thank our communities for working with us to ensure the voices of the community could be heard safely and done so responsibly to ensure the safety of all.’

According to Scotland Yard: ‘Officers have been present throughout the day working with the community organisers and speaking to those attending to allow for a successful day without anti-social behaviour or violence, resulting in just three arrests made.

‘These conditions were authorised following intelligence that some attendees had intended to block the A23 – the primary road running through Brixton. This would have caused significant disruption to those local residents and surrounding areas.’ (source)

In March 2020, the UK Pakistani Muslim rapper Riz Ahmed released a twelve-minute rap video that was a combination movie and story. It is worth the watch:

For those who do not want to watch it, it shows a bunch of Pakistani and Indian Muslim families living peacefully in the UK, when suddenly one day men with guns show up and start taking them away, and executing some of them. Some appear to have crosses emblazoned on their shirts as well of the Templar variety.

I am putting this up not to support Islam, or to “blame Christians”, or anything of that at all. Rather, it is because this is, coming from the Muslim community, one of the most insightful pieces I have seen from them, and that is a lesson to us all.

Ted, Walid, and I have been warning firmly since 2016 about the dangers of a rising nationalism in Europe, and how with the decline and suppression of Christianity save for promoting nationalist causes, eugenics is the rule of the day, and many Europeans feel without a place in the world and being overrun by “foreign” peoples. Some of the frustrations are legitimate, and some are self-infliced, and some are simply forms of tribalism. Regardless of what one supports or does not support, the fact is that- as Ted, Walid, and I have all independently and on Shoebat.com said for years -mass murder is not the answer to Europe’s problems. Mass murder- especially of innocent people in the name of “blood and soil” is wrong because all men are made in the image and likeness of God, and while sometimes peoples need to be fought against, the first initiative that must be performed until exhausted is to do all possible to see the conversion and salvation of other men.

This is the problem with Europe today- she believes in nothing largely, and for many “Christians”, being a a Christian simply means being some sort of patriot. It does not mean a conversion of heart and soul and a will to bring Christ to others, but rather to advance political ends. While politics and religion can and do work together, the politics is to conform to the faith as the latter is what transmits divinely revealed teaching to which all men are accountable without exception and is the fixed axis which the society turns on. It is never the reverse, for when religion becomes the servant of the state, it is always reduced to the worst impulses of man as they change, and thus religion becomes nation worship, and as a worship of the self, is nothing more than another various form of the sin of Eden but contexualized to that particular society.

Riz Ahmed’s video warns about this. He is warning that there are a lot of UK nationalists who, lacking religion or the mere veneer of it without the faith, will have no problem performing a eugenic “purge” of people simply because they are dark skinned or Muslims. In the crass words used by some right-wing nationalists, the motto for such men- even as it regards Christians who are not ethnically of European descent- “If it’s brown, mow it down.”

This is what I fear with these “marches”. Here you see African people marching, screaming curses at the society who has given them a home, and now making demands of that society.

All men know what would happen if “white men” tried this in Africa. They would be laughed at or shot. The same is in the Middle East, the Hindu subcontinent, and most of Asia. Yet they see these same people now coming to their lands and making demands of them.

These people  largely are not Christian, or if they are, they are Christians in name, and many feel a sense of patriotism and attachment by their ethnicity and heritage to their country, and they feel as thought they are being pushed out and disrespected.

Do you see where this is going? This is how violence happens, because people get angry, and without a clear philosophy to guide them other than their own tribalism, they will eventually resort to violence.

These “marches” would be wiser to pay attention to Riz Ahmed’s video instead of marching and making demands, because while they scream, the nationalists simply look at them, make a video, and show it to the many undecided, and when they see it, there is no doubt that many would gladly join in the “fight for our people and homeland” and see mass murder not as a sin that cries out to Heaven for vengeance, but their patriotic duty for King and country.

Forty Million People May Lose Their Homes Because Of COVID-19
France And Germany Want To Produce More Of Their Own Weapons, “Rely” Less On The US
Follow