You are here: Home › Report: 81% Of Stocks Will Show Negative Returns In The Next Decade 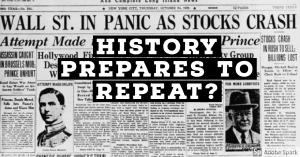 When it pertains to economic matters, I generally do not like to discuss stock prices because stocks are largely useless unless one is playing with large sums of money, and even with that, stocks always have been an “old boys” club where old, monied interests support each other for their benefit. Anyone who doesn’t believe that insider trading does not take place is clearly one who lacks experience with stocks, since Insider trading is the name of the game and anything else is arguably for suckers.

Something that stocks can teach a person, however, is where general economic trends are headed, and so it is always good to pay attention to them. Noting this, Zero Hedge reports by way of Pervalle Global that stocks could see an 81% chance of earning negative returns- economics talk for losing money -as the economy continues to worsen.

The biggest beneficiary of this interplay has been the US equity market, which is evident in return profiles, as over the past 10 years US equities have compounded at 14.2% per year (as of the recent high). However, after analyzing the best-performing assets of the decade’s past, we find forward returns over the next decade are quite poor, compounding at negative 4.8% per year, with 95% of the annual returns following the decade high also negative.

We see this scenario playing out in the US over the next 10 years, as lower growth and lower rates fail to lead to lower volatility and thus higher risk assets. This is primarily due to the recent multiple sigma move in growth, which destroys the foundation for the feedback loop of the past 10 years, as it forces the excess out of the system. Additionally, we can envision an environment where the confines of the lower bound force Central Banks to get creative, which as a result would lead to higher rates and higher vol, creating a difficult environment for equities.

While it’s been a good decade for US stocks, we can not say the same for the next.

We find additional evidence of this view based on a combination of our forward return models. For example, over the past 10 years the market cap of the Wilshire 5000 has grown from $7T to $31T, which equates to roughly 40% of total US household assets. With such a large portion of household wealth tied up in the equity market, the incremental dollars to power the market higher dry up, resulting in a period of very poor returns, as shown below.

We come to the same conclusion on a valuation basis, as the price of the S&P 500 relative to the S&P’s 10-year earnings stream indicates forward returns will also be negative.

Given this backdrop, investors will be forced to turn to the bond market to provide a positive return on capital. Unfortunately, that too will produce a negative rate of return, as shown by our breakdown of the global corporate and sovereign bond market below. This would imply that over the next 10 years, 81% of all tradeable assets ($180T) produce a negative return for investors, leaving only the commodity and currency markets for some form of capital appreciation. (source)

His analysis is very good, and this is all rooted in fundamentals that I have noted before, which is that as income decreases and people can spend less, the flow of money slows, and if the flow of money slows, then less money can be reinvested for people to spend, and so people buy less and stock prices go down as business debt builds and the ability to pay their bills becomes much more difficult. Indeed, it is very hard to pay a dividend when one does not have the money coming in to pay them nor can one borrow the money needed to pay them.

As he noted and I highlighted above, the only things that are going to really get any return are either bonds- selling and trading debt -or currencies- selling and trading money -for investment. But even those are not safe because they assume value being preserved in them for the latter and the ability to service the debts in the case of the former.

What happens when one cannot pay debts and faith in the currency itself is lost? The only way that such an event could happen would be by way of money printing for a long time and a lot of people, resulting in the destruction of the currency but very high stock prices, so good for stocks?

How could this be good for stocks? If one assumes that a higher paper-listed value is good- which many investors do -then in a case of a hyperinflating currency, the values of a stock could rise to millions or billions of dollars. However, one also remembers since stock prices are intended, at some level, to reflect the prices of real goods, that the goods themselves have also inflated that high. Thus a stock for Wonder Bread might be a billion dollars, but if a single small loaf costs $100,000 dollars, what good is it for the common man, since he cannot afford it?

This is the paradox of the stock market- a currency losing value will artificially drive stock prices high in an attempt to reflect the value of the institution, but only because the money is worthless, and if nobody can afford the product, it makes no matter what the value is because it is not tied to reality at all. Not only do such cases clearly lead to ultimate loss long-term for investors, but in the name of “stability”, the same governments who set up the conditions for such to happen will often nationalize companies to try and bring civil stability by making them produce goods at a state-subsidized cost. In other words, it’s a repeat of what happened in Chile, with some variations but the same in principle, under the Allende government, except whereas Allende printed money to pay nationalized industries selling goods at a loss that lead to the destruction of the currency, this would be seizing a company after currency destruction to try and distribute goods to ultimately control civil order while also instituting prices controls.

What should be taken from this is that as the economy gets worse, there is a strong chance that stocks, which are already an unstable investment, will become much more unstable and most likely, pose far more risk than any possible gain that one could get from them.

New Reports From Lebanon Question Official Story On Lebanon Explosion, And Observe That It Was Not Caused By Just Chemicals But By An Ignited Explosive
Yes, There Are Traditionalist Catholics Who Are Nazis
Follow