You are here: Home › First It Was Khashoggi, Now MbS Is Being Accused Of Sending A Hit Squad To Canada 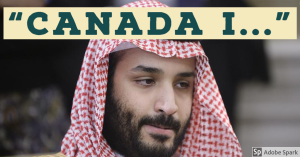 Last year, the news media was in an uproar over the murder of Jamal Khashoggi. We reported on this at Shoebat.com, where we said that the murder was a hit that came from Saudi Prince Mohammed bin Salman (MbS) and which was hastily covered up by the Turkish government, much to the anger of Erdogan and which he still speaks about. Now in another looming scandal, it appears that MbS has sent another hit squad on a failed assassination attempt in Canada of a former Saudi intelligence official the BBC reports.

Saudi Arabia’s Crown Prince Mohammed bin Salman has been accused of sending a hit-squad to Canada in order to kill a former Saudi intelligence official.

The failed plan to kill Saad al-Jabri was soon after the murder of journalist Jamal Khashoggi in Turkey, court documents filed in the US allege.

Mr Jabri, a veteran of the government of Saudi Arabia, fled into exile three years ago.

He has been under private security protection in Toronto since.

The alleged plot failed after Canadian border agents became suspicious of the hit-squad as they attempted to enter the country at Toronto’s Pearson International Airport, court documents say.

The 106-page unproven complaint, which was filed in Washington DC, accuses the crown prince of attempting to murder Mr Jabri in order to silence him.

Mr. Jabri says this is down to him possessing “damning information”. The document says this includes alleged corruption and overseeing a team of personal mercenaries labelled the Tiger Squad. (source)

This could not come at worse time for Salman, who has been attempting to legitimize his rule amid growing chaos and slipping power as Turkey rises.

MbS is not helping anybody except to expedite his own demise, for as the world watches, many people are naturally upset with him and his response. But of all the nations, Turkey is probably laughing the hardest and excited about hearing this news, since it adds justification to her hatred of Saudi Arabia, and for the future, her plans to invade and destroy the nation and destroy the House of Saud.

So what we are looking at here really is not an issue of any danger from Saudi Arabia, but the desperate fighting of a drowning man to stay afloat as the waters of change swell up around him, and as his strength fades, he is pulled under, where the sharks watch him and wait for their turn to make a meal out of his carcass and ignore wholly any of his cries for help before moving on to another new victim to consume.

This is a hard thing to speak of, but it is reality in the world of geopolitics, especially at a time when the world power balance is shifting.