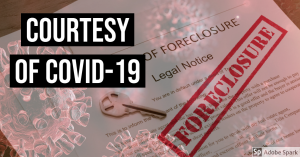 The COVID-19 pandemic could be likened to a domino falling on a line of other dominoes, or a rock thrown into a pond, for it is not the act of the domino falling or the rock being thrown that causes problems, but the ensuing after-effects that cause most of the problems.

I have noted on Shoebat.com that one of the major effects of the virus, economically speaking, is how it is taking down both the retail sales and commercial real estate markets in one action, since declining sales revenue leading to store closures or in some cases, store occupancy but a refusal to pay rent because of a lack of traffic, has caused debts to default, including major mortgages on commercial real estate. Under “normal” times this would not be an issue, but a bank does not want to foreclose on a commercial property it know will likely be impossible to resell and will just fall apart. Thus one sees a game of fiscal “hot potato” where nobody wants to take responsibility or deal with the debt because the legal consequences would be very destructive.

According to the site RetailDive, which studies the retail market, commercial real estate holders have lost hundreds of millions of dollars in revenue, and are trying to work out agreements with banks and retail stores to protect themselves.

Mall operators have put numbers to the stresses of COVID-19 on the second quarter, with the ensuing mass closures, negotiations over rent and accelerating retail bankruptcies.

Simon Property Group CEO David Simon said his company took a $215 million hit during the quarter from rent abatements and write-offs on bankrupt retailers, according to a Seeking Alpha transcript.

For Q2 Taubman Centers logged $32.6 million in uncollectible rent it attributed to tenant bankruptcies and nonpayment during mall closures. Another mall landlord, Washington Prime Group, said that it collected just 44% of owed rent during the quarter while more than 25% of Q2 rent it deemed uncollectible because of bankruptcies or pandemic-related lease modifications.

None of this comes as a surprise given the upheaval of the quarter. As Jefferies analysts put it in an emailed note, “Unpaid rents, abatements and retailer [bankruptcies] hurt 2Q earnings predictably.” The analysts estimated that average base rent per square foot has dropped 5.9% while leased space has declined by 100 basis points to 93.8% as major retailers close hundreds of stores either or out of bankruptcy. (source)

The commercial real estate crisis is a reflection of the consumer debt and consumer mortgage real estate debt problems.

If one cannot make the money o pay his bills, then one loses what one has. However, if everybody is threatened with losing everything at the same time, a “bank run” type situation happens- except unlike a bank run, this kind of a “freeze” in the transfer of money prevents debts getting serviced and thus result in legal fighting which jams the system and could cause a collapse of the economy.

Right now, the only saving grace to the economy has been the “stimulus” payments, which have helped temporarily to service debts but at the long-term expense of the integrity of the dollar, and given that the dollar is the world’s reserve currency, any devaluation to her significantly hurts other nations.

The COVID-19 crisis has been going on for six months now, but this is still just a start, as the effects of the pandemic will continue to reverborate throughout the economy, and contrary to the like that a “recovery” is close, this is absolutely not true, since the fundamental problem is one of debt, not a mere economic hiccup.

In other words, work as much as you can, save up as much as possible, and prepare for even more instability, which as I have noted, will likely show itself around Christmas time, when people are unable to purchase gifts and cause more exposure of the house of cards that the “economy” has been since 2007.

The Catholic Church Is A Very Scary And Weird Place (Horror Stories From Inside The Church))
Top Federal Health Official: ‘If Americans Don’t Socially Distance, We Will End Up In The Worst Health Crisis In Our History.’
Follow