You are here: Home › Turkey In The Midst Of An All-Out Currency Crisis 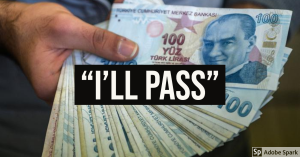 As the world has focused on Erdogan’s power grabs and expansion, a less-discussed aspect of his attempts to re-create a new Ottoman Empire has been serious problems in the Turkish economy. The Turkish lira has seen continual instability since 2018, but according to Zero Hedge, is now in a full-blown currency crisis as there are looming signs of a bank run in progress and a rush to gold amid a loss in teh faith of the Turkish currency amid continuing nationalization by Erdogan.

The Turkish lira has cratered against the dollar and most developed currencies, plunging from 3 TRY per dollar, to a record low 7.37 last week after a brief and valiant attempt at imposing shadow capital control by Erdogan (who is now de facto head of the Turkish central bank) failed miserably at the end of July, and not even a draconian hike in overnight funding rates above 1000% last week (to crush the shorts) was able to prevent a plunge in the Lira to new all time lows.

As their currency implodes (in a nation that is becoming increasingly more “banana” with each passing day as Erdogan solidifies his takeover of every government institution, in the process turning off any potential foreign investors) Turks are discouraged from material purchases of dollars to hedge the collapse in their native currency due to some of the strictest capital controls on the planet, which has left them with just one option.

What’s more, it now appears that locals are choosing gold over the dollar, perhaps because the dollar has also been tumbling against gold in recent weeks due to the Fed’s overt attempts to debase the greenback.

“I think it is the best investment right now so I converted my dollars to buy gold,” the 57-year-old said, adding: “I might withdraw my lira and buy gold with it too, but I am scared to go to the bank right now because of coronavirus.”

Well, Hasan, for people in Turkey it is the best investment, but there is a rather high chance that Erdo pulls an FDR and makes it illegal for anyone in Turkey to own gold so you and your fellow countrymen may want to have a series of unfortunate boating accidents in the coming weeks.

“Locals don’t want to keep Turkish lira, they’ve been dollarizing and buying gold. Turks have hardly ever done that historically,” said Shamaila Khan, New York-based head of EM debt strategy at AllianceBernstein. “That is why you need proactive policies because if you get to that stage where locals are unwilling to keep their money in the bank then you’re heading to a balance of payments crisis. That’s when the alarm bells will start ringing.”

To halt the bank runs, some banks imposed fees on withdrawals this week, while the central bank has curbed cheap credit channels it had opened to ease the coronavirus fallout. Yet while lira deposits now earn more than the 8.25% policy rate their real return is negative with inflation at 11.8%. (source)

What exactly is going on here? Is this an accident? Is Erdogan intentionally undermining faith in the lira so as to clear out Turkish debts by way of a loss of faith in the currency leading to bankruptcy?

We do not exactly know what is happening right now. This is a developing story, but it is important to pay attention to amid the political movements in Turkey, for it will have either two results- a long term detriment, or boost to Erdogan, and as his rise to power has not been accidental, it is unlikely to be the former.