You are here: Home › Belorussian Political Scientist Declares Poland Could Capture Major Belorussian Cities If She Wanted To 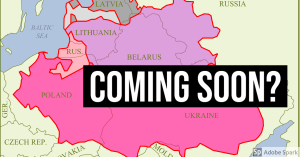 When people think about empires, they often think of the British, French, or Japanese, and sometimes the Americans or the Dutch. However, there are other countries that also had empires such as Denmark, Germany, and Italy. Poland, while she is often mocked and the subject of jokes for “dumb poles”, she is also an imperial power- it just so happens that she has real estate in a very poor neighborhood, but still manages to do well in spite of this.

Once upon a time, Poland was the largest and most populous nation in Europe and controlled all of Belarus, Latvia, Lithuania, large parts of Estonia and Ukraine, and many other parts of Slovakia, Czechia, Romania, Moldova, and even Russia. Remember that it was this same Poland, the Polish-Lithuanian Commonwealth, that stood up to and defeated the Ottomans at the Battle of Vienna in 1683, saving Europe from Islamic invasion.

Poland and Russia have a long history, and while Poland has invaded Russia before, most of history has been the opposite, including the Russo-German orchestrated partitioning of Poland in the 18th century that caused the nation to disappear as a political entity which only reappeared after World War I, and then which had to fight off Russian Bolsheviks and their supporters in 1920, only to be re-invaded and forced under Soviet influence from the end of World War II until the fall of the Berlin Wall and USSR between 1989 and 1991.

They both have historical grudges with each other, but based on history and power differences, Poland has far more to worry from Russia than Russia from Poland, as she does not want to be forced back under Russia’ influence.

With the current Belorussian political troubles taking place, the Russian newspaper Pravda reports that a political scientist with ties to Moscow, Aleksey Dzermant, has said that Poland could capture major Belorussian cities if she wanted to.

Aleksey Dzermant , a political scientist and researcher at the Institute of Philosophy of the National Academy of Sciences of Belarus, told Pravda. Ru , there is a danger that Poland might intervene, although “not too big.” According to the political scientist, the Poles “not in vain pulled the strike group to the borders of Belarus.”

“And the protests in the two western cities cause concern in this regard. That is, it will be very easy to capture them from the Polish side , especially if there is instability inside. This, of course, is the most negative scenario, I do not think that it has percentage of realism, but, nevertheless, there is cause for concern, “said Alexey Dzermant.

“That is, in fact, we have signs of hybrid aggression, where information weapons are the main ones. And this aggression can lead to the demolition of the state system and the Belarusian state that we know,” said Aleksey Dzermant.

The political scientist considers it important to transfer the situation in Belarus into the channel of a political dialogue with the participation of Russia as a mediator in order to find a compromise “without radical demands for Lukashenko’s immediate departure.”

“The Crimean scenario in the Polish version is extremely undesirable, because neither the loss of Brest nor Grodno can be allowed . That is, the whole country must be kept, it will be extremely important,” concluded Aleksey Dzermant. (source)

Is he correct? It is possible that it is so. But it is unlikely that Poland would do that, for while she is a historical empire, as noted above, Poland also is no fool. Indeed, to move on Belarus would be exactly what Russia would love to see happen, since Russia would immediately use it as an excuse to “help” Belarus, or to justify an invasion to assert herself.

Poland has remained curiously quiet with all of the events taking place, given the seriousness, likely because she knows that changes are under way, and that during times of chaos, especially with a Russia seeking excuses to assert herself, eventually in Poland, saying nothing is far more than saying something.

Poland is not stupid, for one does not survive living between two psychopaths with delusions of grandeur- Germany and Russia -for centuries by being a fool. Likewise, the US has a strong military presence in northeastern Poland near the Belorussian border, and moving on Belarus would be against US interests, and given the decades of strong cooperation between the US and Poland, plus the monies given to Poland by the US military and the protection by their mere presence, there is no way that Poland is going to do anything (unless she loses her mind) to jeopardize those benefits, for while one can point to the negative effects of American influence in Poland (and there are many), the positive is that the US serves as a cushion against German influence and a hard barrier against Russian influence, softening the impact of the former and many times preventing the influence of the latter. Given Poland’s geographical position, the American presence is as best of a “wildcard” as she has ever had in history, and she is fully availing herself of its benefits.

It is true that Poland has been re-opening historical relations with Lithuania, which was part of her empire, and this is not to say that Poland many not try to “assert” herself in Eastern Europe under the proper conditions. But the conditions needed are not those right now, for the current state is one of just silent watching as Russia and the Western world argue in Belarus and she sees the fires burn, where they go, and keeps them out of her own back yard while jumping to the tune of the American beat as long as it helps her to avoid, soften, or prepare for the inevitable conflict that will come to her nation.