You are here: Home › California Under Worst Heat Wave In Seventy Years 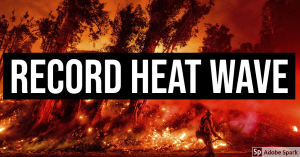 California is known as a “hot” place, although her reputation has significantly “cooled” off for many reasons. Now amid growing taxes and social instability, she is experiencing another “cooling off” as record high temperatures are causing likewise a record heat wave, the worst one in seventy years, and all happening at a time when massive fires are scorching the state, causing rolling blackouts as it has been reported by Bloomberg.

First, it was the prospect of wildfires that took down large swaths of California’s power grid. Now, it’s the worst heat wave in 70 years.

Climate change is contributing to increasingly extreme weather in California. Less than a year ago, millions of people were plunged into darkness in an effort to keep power lines from sparking catastrophic wildfires. This time, dangerously high temperatures are taxing the system, bringing about the state’s first rolling blackouts since the 2001 energy crisis.

What’s more, they’re hitting just as the pandemic has trapped people indoors in a state that has recorded more Covid-19 infections than any other place, leaving the powerless with a difficult choice between enduring the heat indoors and seeking relief elsewhere. It’s the latest collision of wild weather and the pandemic simultaneously wreaking havoc upon the world. Last week, Tropical Storm Isaias left millions across the eastern U.S. without power for days, forcing remote workers into coffee shops and crowded parking lots to access Internet.

For Californians, Saturday was the second night in a row that grid operator California Independent System Operator made the rare call to shut off power. An estimated 352,500 customers went dark — or roughly 1 million people based on the average size of a household. A day earlier, about 2 million people lost service over the course of four hours. And more outages are expected with the heat wave.

“I’m pretty shocked by this — I think everybody is,” said Michael Wara, director of the Climate and Energy Policy Program at Stanford University. “This has to be addressed with a lot of attention, and fast.”

Extreme weather fueled in part by climate change has taken a profound toll on electrical grids in recent weeks. Just days ago, millions of people lost power across the U.S. Midwest after a wall of lightning, hail and deadly winds tore a path of ruin from central Iowa to Chicago. Before that, Tropical Storm Isaias darkened homes from the Carolinas to Connecticut.

For California, the problem is heat. An unrelenting high-pressure system is pushing temperatures upward, leaving the region facing what’s expected to be its hottest two weeks in 70 years. That’s driving up power demand to extreme levels, making it harder for generating plants to keep pace.

Before Friday, California hadn’t imposed rolling blackouts since the energy crisis of 2001, when hundreds of thousands of customers took turns being plunged into darkness, power prices surged to record levels and the state’s largest electric utility went bankrupt. (It went bankrupt a second time last year in the face of crippling wildfire liabilities.)

The rotating blackouts on Saturday took Californians especially by surprise. Less than an hour before ordering outages, the grid manager had said that blackouts wouldn’t be necessary. Then a 470-megawatt power plant went down, along with 1,000 megawatts of wind power, and it became clear the system couldn’t meet demand, said Anne Gonzales, a spokeswoman for the ISO.

Similarly on Friday, the grid operator ordered blackouts after a 500-megawatt generator tripped offline unexpectedly. A 750-megawatt unit was already down. If both had been in service, the agency wouldn’t have had to call for outages, Gonzales said.

“There needs to be a quick and serious look,” Wara said, “at what our reserves are and the degree of which market conditions are affecting their quality and reliability.”

The abrupt and unannounced nature of the rotating outages made the situation especially disruptive for those affected.

Mandy Feuerbacher, an immigration attorney in Los Gatos, saw her lights go out without warning on Friday evening. Her two-year-old twins were up until 2 a.m. crying from the heat. She and her husband moved their beds into the downstairs kitchen, hoping it would be cool enough in there for them to sleep.

“The babies were so hot. They were freaking out. We were really worried about our food spoiling,” Feuerbacher said. “It was terrible.”

Saturday’s outages were at least briefer. Edison International’s Southern California Edison utility said about 70,000 customers were affected by the short-lived event. “At 6:28 p.m., we dropped load. We de-energized about 70,000 customers,” Southern California Edison spokesman Robert Villegas said. “Then we were directed by CAISO to restore them by 6:44 p.m.” (source)