You are here: Home › President Trump Says He Spoke With God On How To Rebuild The Economy 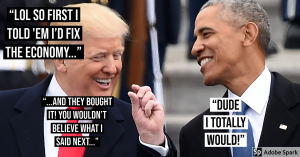 The Christian Post reports that President Trump says he spoke with God about how to rebuild the economy, and that he believes God will help him rebuild it.

President Donald Trump revealed he spoke to God about the economy amid the coronavirus pandemic and God told him He’s going to have him rebuild “the greatest economy in the history of the world” again.

Speaking at a small rally that attracted several hundred supporters in Mankato, Minnesota, Monday, Trump branded presumptive Democratic presidential nominee Joe Biden as a “puppet of left-wing extremists” who would destroy the American way of life by “trying to erase our borders, eliminate our police, indoctrinate our children, vilify our heroes” and “take away our energy.”

If Biden were to be elected, he would “replace American freedom with left-wing fascism,” Trump added.

The president hailed his pre-pandemic economic record which reflected a strong stock market, wage growth of about a 3% average and low unemployment as “nothing short of an economic miracle.”

With the COVID-19 pandemic, the U.S. economy suffered its biggest blow since the Great Depression in the second quarter as consumer and business spending plummeted, the World Economic Forum noted. Gross domestic product dipped at a 32.9% annualized rate last quarter, “the deepest decline in output since the government started keeping records in 1947,” the WEC said.

“What we have achieved together and what we’re doing together is nothing short of an economic miracle and now we’re doing it again,” Trump told his supporters. “We built the greatest economy in the history of the world and now I have to do it again.”

He then revealed the conversation he had with God about the economic crisis.

“You know what that is? That’s right. That’s God testing me,” Trump explained. “He said, You know, you did it once. And I said, ‘Did I do a great job, God? I’m the only one who could do it.’ He said, ‘That you shouldn’t say. Now we’re going to have you do it again.’ I said, ‘OK. I agree. You got me.’ But I did it once. And now I’m doing it again. And you see the kind of numbers that we’re putting up. They’re unbelievable. Best job numbers ever. Three months, more jobs in the last three months than ever before.” (source)

Does one actually believe Trump after the last four years?

Trump has lived a hedonistic, playboy lifestyle for most of his life. He cannot answer basic questions about Christianity or religion. He shows no signs of piety save for when he is on the campaign trail for a photo opportunity. He has been of all the presidents the one who has spent the most and has pushed the country further along the road to hyperinflation than any other, including Obama. When he had the chance to help Christian refugees, he put them in danger of being deported, likely to their deaths.

Does one actually believe that Trump “spoke with God” about fixing the economy?

The economy has been dying for years, and as I have said before, there are only two ways to fix it- either a complete jubilee that involves a shutdown of the fraudulent organs controlling the nations (seizing and nationalizing the Federal Reserve Bank, jailing the bank officers, relinquishing debts), or printing money until the currency becomes worthless so the ensuing chaos allows for debt to be disowned and a new paradigm to begin once more. Both involve pain, but the former is more honest and better for all than the latter, which Trump has been following.

When Bush II ran for office, he spoke a lot about God, but Bush II seemed genuine in his convictions (the same cannot be said about Bush I), although he made a lot of serious mistakes, and largely was a puppet controlled by his father and Dick Cheney. Trump has shown nothing of the piety that Bush II did, and if there has been any trace of religious connections in the current White House, it has come from Melania, and sparingly too.

Such language coming from Trump is just another attempt to pander to what is left of the Christian-Boomer bloc that made up part of what is left of his base. Yet it is in such a contradiction to the life that Trump has lived and the presidency that he has carried out so far, it is difficult to believe that Trump actually is telling the truth with these words.

It is more proof that people would be better off to stop listening to politicians talk about what God means to them, and instead focus on themselves and what they can directly influence in their local communities, and to never trust when a man in a suit seeking power says that he “talked to God” lest he can back up his words with his actions, which given Trump’s patterns of behavior, are very doubtful.

Japan’s Economy Suffers The Worst Hit Ever Amid Claims She Is Done Being ‘Pacifist’ And Wants To Remilitarize
The Rise Of Japan: A Parallel Between History And Now
Follow