You are here: Home › Japan’s Economy Suffers The Worst Hit Ever Amid Claims She Is Done Being ‘Pacifist’ And Wants To Remilitarize 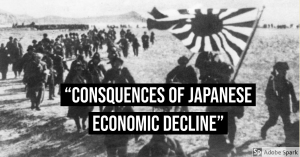 One pattern that I have been hammering at is that economy patterns are linked to political movements, and in the case of Germany, given the “cyclical” nature of her history as a major power of Europe and a nation that tends to use violence heavily against her neighbors, poor economic conditions can result in political violence. This was the point that Hans Frank, the son of the former National Socialist Governor of occupied Poland said to the BBC, which is that Germany’s tendencies to violence are still there, and all it would require is five-to-ten years of “heavy economic problems” for her to return to militarism.

We are seeing Frank’s warning come true by way of COVID-19, which has shut down economies around the world and exposed long-existing economic problems, including in Germany, and becomes more exacerbated with the migrant crisis that is taking place now.

Frank’s observations are not just pertinent to Germany, but other powerful nations in the world. As such, it is important to look at Japan, for Japan operates in a similar manner to Germany with historical patterns of violence and conquest. As such, it is not illogical to think that a serious downturn in the Japanese economy- something far worse than the state of “stagflation” she has known for decades -could prompt a return to nationalism and militarism in east Asia.

It is with great interest then that the Japan Times reports that Japan’s second quarter GDP suffered a historic 27% contraction.

Japan’s economy in the April-June period shrank an annualized 27.8 percent in real terms from the previous quarter, the sharpest contraction on record, as economic activity was restricted under a state of emergency during the coronavirus outbreak, government data showed Monday.

The preliminary gross domestic product data corresponds to a 7.8 percent decrease on a seasonally-adjusted quarterly basis, marking negative growth for the third consecutive quarter, according to the Cabinet Office.

Comparable data are available since the April-June quarter of 1980, but a Cabinet Office official said the latest figure is considered the largest shrinkage on record dating back to 1955, when reference values can be traced to.

Even before the virus’s spread, the economy had been affected by the U.S.-China trade spat and a consumption tax hike last year. Damage to the economy has deepened with the impact of the pandemic after the central government declared a state of emergency in April. (source)

Meanwhile, the New York Times reports that Japan, while being pacifist, does not want to be pacifist any more, citing threats from North Korea and China, wants to purchase missile defense systems, citing the Trump administration’s desire to have allies participate more in their own national defense.

Shinzo Abe is facing some of the toughest challenges of his record-setting tenure as Japan’s prime minister, with persistent flare-ups of the coronavirus, an economy mired in recession, and a public fed up with his government’s handling of the crises.

Yet Mr. Abe’s administration is focusing on a different threat, one that lines up with a long-running preoccupation for the prime minister: the prospect of ballistic missile attacks by North Korea or China.

Such a capacity would be unremarkable for most world powers. But for Japan, which on Saturday commemorated the 75th anniversary of the end of World War II — and 75 years of renouncing combat — the proposal is fraught. In considering loosening restrictions on Japan’s ability to attack targets in other countries, the party has revived a protracted and politically sensitive debate.

The discussion is taking place as Japan finds itself caught between China, whose rising military aggression has reverberated across Asia, and the United States, whose once-ironclad commitment to guaranteeing the region’s security has come into question.

But while Japan has decided against the American missile system, Mr. Kono said it was important to “send a clear message” to North Korea about the country’s alliance with the United States and “our resolve about protecting Japan against any missile offensive from North Korea.”

Under the alliance, the United States has traditionally assumed the role of providing offensive capabilities, while Japan has stuck to purely defensive activities.

“The old paradigm of the U.S.-Japan alliance is that Japan wears the ‘shield’ and hosts the ‘sword,’” said Euan Graham, senior fellow for Asia-Pacific security at the International Institute for Strategic Studies in Singapore, invoking a commonly used metaphor for the stationing of about 55,000 American troops in Japan.

But “that paradigm has been breaking down for many years,” Mr. Graham said, a trend that has only accelerated as the Trump administration has pushed allies to assume more responsibility for their own defense.

Mr. Graham noted that Australia, another U.S. ally in the Pacific, had recently announced new military spending plans for long-range missiles. South Korea also recently negotiated a loosening of missile guidelines imposed by the United States that would allow it to build rockets that could be applied to long-range missiles. (source)

I put these two stories together because they both connect to the same topic, which is the return of a militaristic Japan. Economics always precedes politics, and Germany and Japan have many shared historical points, so while they are not the same, parallels can be made between the two. It is arguable that economic decline in either of these nations eventually can result in a return to militarism, and as we see, COVID-19 is exposing problems in the Japanese economy, and this is taking place at the time when Japan is making statements about becoming a military power again.

China may be a large nation with a strong military and imperialistic desires, but China is extremely divided, weak, and ineffective. One only needs to look at the recent border skirmish between Chinese and Indian soldiers, where 20 Indian and 40 Chinese soldiers were killed. It was a “battle of the boneheads”, but even India, with all of her miserable incompetency, still could not be more incompetent than the Chinese, whose claims of grandeur are only surpassed by their practical hapless incompetence.

Japan on the other hand is a very violent nation that has conquered China many times. Her soldiers have a long history of being highly organized, disciplined, logical, tenacious, and violent. She is far more dangerous than China ever has been, and given her organization, economic power, infrastructure, and dedication, she could easily remilitarize quickly and seize China’s key points so as to choke her economy and put the nation into complete chaos.

Remember also that Germany apologized for many of her actions in World War II. Japan has never apologized, and instead reveres her war criminals as human deities, such as at the infamous Yaksuzuni Shrine, and she is defiant in her position.

When Japan does remilitarize, China will shake with fear because the Japanese are genuinely terrifying and will likely, along with the fact that most of Asia hates China and views her as a threat and a nuisance, will annihilate her as other nations, including her Russian ‘ally’, will sit back and watch.

If this were an anime, it is not going to be the kinds with happy girls running around and strange music or animals. It is going to be the dark kind- the one with blood, guts, and tentacle-type monsters attached to robots that rip people apart and torture them in the most horrible ways all for entertainment. If history is a guide, one only needs to look to the Nanking massacre to see what the future holds.

But it all has to begin somewhere, and knowing that war is an expression of political force, and that economic precedes politics, that the economic downturns taking place in Japan because of COVID-19 is about a lot more than just a virus, because the economy shaking is just a part of the larger earthquake that will topple over the entire world once it is done.