You are here: Home › North Korea Orders Pet Dogs Confiscated, Euthanized, And Chopped Up For Food 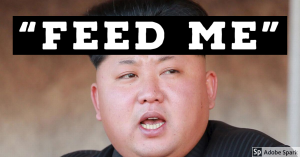 It is known that in nations which embrace communism, starvation often occurs, either as an unintended consequence, or a tool of social manipulation, but all as a result of policy. As many have referenced, Rhodesia was once one of the most bountiful nations in the world for food production, but following her takeover by the ZANU under Mugabe and her transition to Zimbabwe, the nation become one of the poorest nations in Africa and the world, and the people were reduced to eating zoo animals for survival. In Ukraine during the Soviet years, Stalin’s policies of agriculture collectivization enforced by Gengrikh Yagoda and Lazar Kaganovich resulted in the starvation deaths of ten million Ukrainians. In Chile, the hyperinflation driven by Allende’s nationalization policies resulted in a similar problem of mass hunger and food shortages.

A similar problem is being faced by the tiny, powerless, but geopolitically powerful and exploitable North Korea, which according to Korean Chosun News, confirmed by the Daily NK, and re-reported by Business Insider, has ordered people to give up their pet dogs and is forcibly confiscating them for food.

North Korea has launched a clampdown on the ownership of pet dogs among the Pyongyang elite as food supplies run short.

Trumpeted as protecting the country against capitalist “decadence,” the move appears aimed at appeasing increasing public discontent amid the dire economic situation.

According to a source, North Korean leader Kim Jong-un issued a ban on pet ownership in July, denouncing it as “a ‘tainted’ trend by bourgeois ideology.”

“Authorities have identified households with pet dogs and are forcing them to give them up or forcefully confiscating them and putting them down.”

A pet dog in a file photo grabbed from a North Korean soap
Some of the dogs are sent to state-run zoos or sold to dog meat restaurants, the source added.

Pet owners are “cursing Kim Jong-un behind his back,” but there is little they can do, according to the source.

Animal rights are even lower on the regime’s agenda than human rights. Pet ownership was long considered Western decadence, but attitudes seem to have relaxed after the North hosted the World Festival of Youth and Students in 1989, and the Pyongyang elite started flaunting expensive lapdogs as status symbols.

The source said, “Ordinary people raise pigs and livestock on their porches, but high-ranking officials and the wealthy own pet dogs, which stoked some resentment.”

One defector said these clampdowns are usually enforced without great enthusiasm but seem to be more severe this time. (source)

It is not good to overemphasize stereotypes, but sometimes, truth is stranger than fiction.

That North Korea is actually confiscating dogs as food does not seem to be a good sign, for this suggests that there is a greater food shortage in the nation than what is already present.

Likewise, it also is proof that Japan’s assertions that North Korea is some sort of a “giant threat” is groundless. Starving people do not make for aware or competent soldiers, and if they do pose any threat, it is to the first all-you-can-eat buffet that they happen to pass, because one cannot think about fighting a war when one is not sure if one is going to survive because he has not eaten in a long time.

North Korea is truly a comical nation but is being presented as “aggressive” and “tough” because it fits a manufactured image that other nations use to justify their own militarism with, such as what is happening with Japan. Likewise China, Russia, and the US also make use of North Korea for their own benefit. In the meantime, the Kim family eats well and becomes fat while tens of millions of her citizens starve and are eating somebody’s pet because that is what they are being told to eat, since policy forbids them from taking care of themselves lest they too are accused of being ‘traitors’ and are put to death.