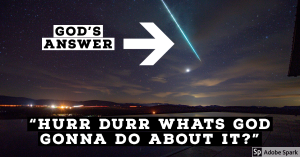 Natural disasters can have major consequences for the world, whether they come from the earth or the skies. According to AFP by way of Yahoo! News, a small asteroid has caused scientists great concern as it passed by earth, barely missing entrance to her.

An asteroid the size of an SUV passed 1,830 miles (2,950 kilometers) above Earth, the closest asteroid ever observed passing by our planet, NASA said Tuesday.

If it had been on a collision course with Earth, the asteroid — named 2020 QG — would likely not have caused any damage, instead disintegrating in the atmosphere, creating a fireball in the sky, or a meteor, NASA’s Jet Propulsion Laboratory (JPL) said in a statement.

The asteroid, which was about 10 to 20 feet (three to six meters) long, passed above the southern Indian Ocean on Sunday at 0408 GMT.

It was moving at nearly eight miles per second (12.3 kilometers per second), well below the geostationary orbit of about 22,000 miles at which most telecommunication satellites fly.

The asteroid was first recorded six hours after its approach by the Zwicky Transient Facility, a telescope at the Palomar Observatory at the California Institute of Technology, as a long trail of light in the sky.

The US space agency said that similarly sized asteroids pass by Earth at a similar distance a few times per year.

But they’re difficult to record, unless they’re heading directly towards the planet, in which case the explosion in the atmosphere is usually noticed — as in Chelyabinsk, Russia in 2013, when the explosion of an object about 66 feet long shattered windows for miles, injuring a thousand people.

One of NASA’s missions is to monitor larger asteroids (460 feet) that could actually pose a threat to Earth, but their equipment also tracks smaller ones.

“It’s really cool to see a small asteroid come by this close, because we can see the Earth’s gravity dramatically bends its trajectory,” said Paul Chodas, the director of the Center for Near-Earth Object Studies at NASA.

According to the JPL’s calculations, the asteroid turned by about 45 degrees due to Earth’s gravitational pull. (source)

The only reason I am interested in this story is because of a piece I did in December 2018 about the destruction of Sodom.

You can read the story here, but what I reported is that archaeological evidence has shown that the destruction of Sodom and the other cities was caused by a meteor explosion above the plain that rained burning sulphur and metal on the city in an explosion as powerful as a ten megaton nuclear weapon, and with temperatures as hot as the sun’s surface.

Right now, the world is engulfed by the sin of Sodom. It is a sin that cries out to Heaven for vengeance, and yet there is really not a place in the world that has not been infected, either by choice or by force, with this particular perversion. It is more prolific now than it has ever been in history, and if one was to look back at the real city of Sodom today, it is likely that one would think it was probably more ‘conservative’ than many of the very liberal and pro-sodomite areas in the US.

Yet Sodom and Gomorrah is real, and God is real, and truth does not change based on man’s desire. Thus the lessons of four-thousand years ago are as relevant today as they were in those times.

I do not assert there is a direct connection between the past and this. Indeed, I have no proof to make such a declaration. What I can do is make an observance, that knowing what archaeology has taught man, the nature of this sin, and how the world is consumed by it, but an asteroid or meteor passes very close to earth, should cause any thinking person to wonder.

Is it possible, that in addition to human actions, one may a partial “repeat” of what Lot experienced at Sodom, if not now, then at some point in the future?

It is something to think about.