You are here: Home › Mali Government Overthrown In Military Coup 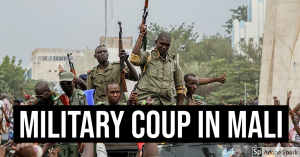 Mali has been a point of discussion at Shoebat.com as due to her location, power in West Africa, history, and current partnerships with the French and Americans, is a strategic nation that we have been concerned is going to go through a lot of changes. This recently took place as the government of Mali had a military coup that overthrew the current president, Ibrahaim Keita, and replaced it with a military government, and according to the BBC it says that it will permit elections soon.

The soldiers who ousted Mali’s President Ibrahim Boubacar Keïta say they plan to set up a civilian transitional government and hold new elections.

The spokesman for the soldiers said they acted to prevent the country falling further into chaos.

President Keïta resigned on Tuesday night saying he did not want “blood to be spilled to keep me in power.”

The African Union, regional leaders, and the UN have condemned the coup.

The UN Security Council is to hold an emergency session on Wednesday to discuss the latest developments.

Mali, a vast country stretching into the Sahara Desert is among the poorest countries in the world and has experienced several military takeovers. It is currently battling to contain a wave of jihadist attacks and ethnic violence.

The soldiers, calling themselves the National Committee for the Salvation of the People, said they did not want to stay in power.

“We are keen on the stability of the country, which will allow us to organise general elections to allow Mali to equip itself with strong institutions within the reasonable time limit,” said the group’s spokesman, Col Ismaël Wagué, the air force deputy chief of staff. (source)

The New York Times points out that for a while, Mali was doing well, before it collapsed back into national chaos, and has been going through continue instability for the past decade.

Likewise, knowing that she borders Burkina Faso, another nation terrorized by violence, and that the violence and instability in West Africa has been a driving force behind migration north towards Europe, and considering how the refugee crisis in Europe has been shown to have been tied to western geopolitical manipulation as well as have been aiding the transfer of people to Europe, one must wonder if the current coup in Mali is a part of this.

In other words, as we have seen destabilization take place in other parts of Africa and the Middle East that preceded the refugee crisis, are we seeing another like case of this here?

We cannot be sure. What we do know is that instability in Mali justifies a continued buildup of the already present French and American military involvement there, and that as always, social chaos leads to population movements as a historical phenomenon.

It will be interesting to see what happens in Mali, and what the US response will be, as American military personnel are already crawling all over Africa in almost two dozen nations, and this coup in Mali will likely only serve to accelerate that trend.