You are here: Home › The Anti-Meat Propaganda Begins? 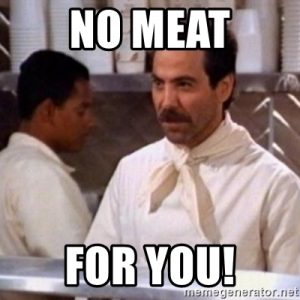 Too much of anything is usually not good, because it creates an imbalances, and whether it is in politics, health, or anything else, imbalances that exist, created intentionally or not, tend to neglect other areas while overfavoring others, and such lopsided, uneven development causes more problems.

It is obvious that eating too much meat is not good. But, one can also eat vegetables to the point of a lack of health (think many vegans or raw vegans especially), or other products. However, in recent years, it has been noted there is a trend being pushed for “meat alternatives”, such as insects or other bugs, and various forms of repackaging vegetarianism. That said, there is a strong possibility that this will continue for the future, as men with a eugenic and anti-Christian mindset continually seek to redefine the world in their self-asserted and believed “image” to pursue a false divinity while enslaving the rest of the human race. The consumption of meat is not about the benefits or health issues, but about power, and elevating themselves while debasing others.

It is of interest then that as Yahoo! News reports, another new study is declaring the obvious, that those who eat meat ‘regularly’ are going to be less healthy.

Eating meat regularly could carry a higher risk of a wide range of common illnesses, a new study suggests.

Previous studies have linked red and processed meat – like bacon or sausages – to several diseases, such as bowel cancer.

But a new study examined the relationship between meat consumption in general and 25 common illnesses other than cancer.

Researchers from the University of Oxford looked at 475,000 men and women who are taking part in the UK Biobank study.

Participants reported their levels of meat consumption – which was checked with follow-up surveys – and researchers tracked those taking part for an average of eight years to assess whether they went on to develop any of the conditions.

People who ate meat three or more times a week were deemed to be “regular” meat eaters.

These people were also likely to have more “adverse health behaviours” than people who ate meat less regularly, including being overweight, smoking, drinking and eating less fruit and vegetables.

The study, published in the journal BMC Medicine, found that higher consumption of meat – including processed and unprocessed meat – carried a higher risk of heart disease, pneumonia and digestive conditions.

Fried Food
Eating processed red meat was linked to a range of conditions (Nick Ansell/PA)
People who ate more meat were also more likely to have polyps in the bowel and diabetes.

But eating unprocessed red meat was linked to a lower risk of iron deficiency anaemia.

People who ate more poultry, including chicken and turkey, were found to be more likely to have reflux – or gastro-oesophageal reflux disease – and digestive conditions, diseases of the gall bladder and diabetes.

But they were also found to have a lower risk of anaemia.

The authors said that having a higher body mass index (BMI) accounted for a “substantial proportion” of the increased risks found among regular meat eaters. (source)

Eating too much meat is an obvious issue for anyone. However, it will be interesting to look for a trend of more “studies” that suggest meat consumption is ‘bad’, and that ‘meat alternatives’ is the ‘solution’ to the problem and will have more ‘studies’ published that say such is healthier and better to eat.

Claim: Thousands Of Christians, Laity And Priests Alike, Murdered By Ethiopia And Eritrea At Church In Tigray Fighting
Christians In Yemen, Or Pulling The Wool Over The Eyes Of Christians?
Follow