You are here: Home › Will Biden Give “Reparations”? 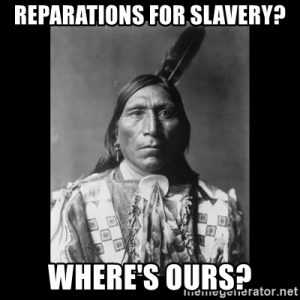 It is arguable that at some point, everybody had family that enslaved or was a slave to another. Slavery is a fact of human history going back to its earliest days, and regardless of what one thinks of it, one can neither ignore or dwell on this fact. If one was to ignore it, it is to ignore a major part of human history. But if one is to dwell on it, then everybody falls into a perpetual cycle of blaming the other for the past, and then people fight over things that not only did they never experience, but fight so that social functions stop in the name of a mutated tribalism. The best way to handle slavery and it discussion then, it seems, is to acknowledge the past, take steps to prevent abuse in the future, and unless one was directly affected, then to leave the matter alone.

In contemporary America, many people are not content with the concept of leaving the past alone. Many people in the US of West and Central African descent whose ancestors were slaves almost two centuries ago will claim that as a result of historical and genetic accident (for no man chooses his family heritage) he is entitled to money for things he never experienced because “the system” is “racist”. This naturally, of course, ignores the fact that if such a claim was to be made, what is to stop the English from making the same claims of the Italians for slavery in Roman times, or the Polish claims against Germany/Austria/Russia, or the Russian claims against the Mongols?

But as Axios notes, some African-American congressmen believe that Biden’s administration may seriously begin the process of paying reparations.

Why it matters: Biden said on the campaign trail that he supports creation of a commission to study and develop proposals for reparations — direct payments for African-Americans.

A House panel heard testimony on the legislation last week.

“I think that [creation of a commission] will pass,” Richmond said.
What they’re saying: Richmond said that while the timeline for the commission isn’t knowable, “if you start talking about free college tuition to [Historically Black Colleges and Universities] and you start talking about free community college in Title I and all of those things, I think that you are well on your way.”

“We have to start breaking down systemic racism and barriers that have held people of color back and especially African-Americans,” he said. “[W]e have to do stuff now.”
What’s next: Richmond pointed to a Biden executive action “breaking down barriers in housing, making sure that African-Americans can pass down wealth through homeownership, that their homes are not valued less than homes in different communities just because of the neighborhood it’s in.”

If this does happen, and it will be a trend to watch for, it is not just the “white” bloc that will be disproportionately furious, but most importantly, the Asian and critical Hispanic blocs.

Ask yourself, why should the Hispanics- the disproportionately large number of them who arrived after 1970 -be forced to “pay” or feel a sense of complicit guilt for the abuse of another people they neither were in contact with or have no history with, and also considering that many Hispanics came to America to escape the slave-like conditions that many lived in? What is to be said of the many Asian peoples, who not only are known for their high rates of economic success, but also lack the same shared history and many who escaped slavery and abuse too? Is the average “Mr. Nguyen” who escaped the Viet Cong by a hair and whose children, born in the US, went on to do very well in the US, a problem or a victim? Likewise, is the average “Mr. Gonzalez” who came over the US border in a truck and worked as a fruit picker, is sending his son to university on a scholarship, proof of “systemic racism”? This is let alone the tens of millions of whites who came from nations that had no connection to the American slave trade and most likely, especially if they were in the Slavic nations and many parts of Germany, were slaves themselves when they left?

A trend to watch for is if “reparations” does become popular, to see racial tensions increase, with whites, asians, hispanics, and well-spoken blacks of good intentions who find the concept repugnant to form a mutual alliance against the elements of the black bloc that support reparations and those of other ethnic and racial groups who support said policy. It would only exacerbate the left-right tensions and make them worse, possibly to the point of bloodshed.