You are here: Home › The Trump False Prophets Scatter To The Winds 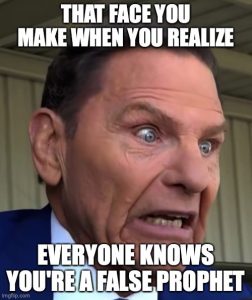 Years ago, I wrote that the Trump movement had become a cult of personality, where people began to elevate Trump and praise him in ways that ignored his flaws and exaggerated his strengths, with the effect being that an unhealthy picture of him was formed. He became in a sense a false political idol onto which the Republican party cast their hopes and, all recent nonsense aside, showed himself to be false as he largely ignored the concerns of his constituents and even did the opposite. This has been my main issue with Trump- that he made serious promises, and then was inconsistent with his principles after getting power.

Persons on the Evangelical left and right flocked to him and aligned themselves with him to give their support, and as many found out who supported such people, they were fed lies. One famous example are the “Trump prophecy-teers”, who essentially made up false prophecies to get money from people who liked Trump and professed to be Christians. As the Christian Post is now reporting, at least one of such persons has now closed his ‘ministry’ following Trump’s second term loss.

Popular self-styled prophet Jeremiah Johnson of Jeremiah Johnson Ministries, who was among several high profile Christian leaders who inaccurately predicted a second term for former President Donald Trump, has temporarily suspended all online ministry activity after a visitation from God.

“I was recently visited by the Lord in a very significant way while seeking Him about the future of the prophetic ministry he has given me,” he began in a letter to his followers published on Facebook Monday morning.

“After much prayer and careful consideration, I have decided to suspend all our online ministry activities for the next two weeks as I meet with our nine staff members and begin to unpack the radical shift that God is asking for in this next season,” he said.

“With influence comes great responsibility and I recognize now more than any other time in my life just how much my decisions are impacting the global body of Christ, both negatively and positively. I am so grateful for the wise counsel that He has surrounded me with in this season that has kept my heart in a healthy place and also the liberty that I have been given to hear from God for myself,” Johnson said Monday in his letter thanking both his ministry supporters and critics. (source)

Love Trump or hate him, presidents are people for good and bad. Trump had good points. He also had bad ones. But bad or good, it is always an awful thing when religion is used for political manipulation. This does NOT mean that God does not speak to or use political leaders, even bad ones, but such messages have to be clear and transcend party or personal differences.

If one believes truly that Trump was chosen by God, that is one’s opinion. However, such a statement would be more convincing to believe if the same “pastors” and “preachers” calling out Trump’s supposed election would also address his many sins such as open fornication and the support of Sodom, for even King David, one of the greatest kings of the Old Testament, was directly called out by the prophet Nathaniel for his conspiracy to murder his best soldier so he could fornicate with his wife. Likewise, there has never been any real repentance from Trump for his actions, or even a profession of Christianity, for the only religion that man seems to follow is the god of the pagan tale of Narcissius, adoring that which he sees in the bathroom mirror’s reflection each morning.

Perhaps the best thing that Trump’s election did, as it pertains to American Evangelical Christianity, is to just further expose for all to see the ridiculous thing that it has become. Scandals are in all religions, and that is no secret. The Church has hers, but they are open and well-known- there is no hiding or denying them, and the Catholic Faithful have clearly chosen their sides for good or ill, which does not change divinely revealed truth, but just separates the “goats” from the rest of the sheep.

The Evangelical issue is much deeper, for the overlap between nationalism and religion with the Evangelicals is a cancer that is consuming the entire bloc and not easily able to be disposed of, as it rests on a false sense of history bound to collapse. Trump did not do this, but his selfishness and unchristian behavior in combination with the treatment he received from the Evangelical establishment just forced this problem to be more exposed. Far from being strong and a united front, the Evangelical sect is gravely ill and, as with all heresies, inclining to its own destruction.

A trend to watch for will be in addition to the shuttering or contracting of current “ministries”, the breakup of Evangelicals into more “conservative” groups, possibly going with more traditional and “conservative” Protestant sects, or making the full journey into history and theology by embracing the Catholic Faith. As for the other more liberal or ‘apathetic’ groups, there is a strong chance they will simply float back into the sea of American secular life that, while not admitting it, is the unofficial religion of the US and always was.

Will A Global Internet Tax Be Implemented?
Will Biden Give “Reparations”?
Follow