You are here: Home › New Gas Pumps Being Banned By Municipalities In Favor Of ‘Electric’ Charging Stations 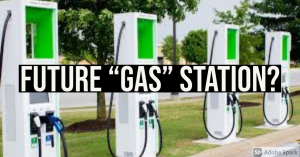 It is a known facet that gas powered tools are superior to electric ones, and likely will always be barring major, serious changes to their functioning. That said, the push for electric cars has remained a constant, and is likely going to be a major trend for the future, namely because given that electricity has to be generated and produced, it has within it a greater ability to be able to control people’s actions and the areas they can travel to. It also can be stopped by external means a lot easier than a gas-powered car.

But suspicions aside about what such a vehicle could potentially be used for, the practical reality is that such vehicles are being pushed, and will become a lot more common. There are a lot of people who do not want them, but in an interesting approach, Axios reports that some cities in the US are trying to start a trend of ‘banning’ gas stations. That is, forbidding the construction of new ones or the renovation of old ones, and merely “encouraging” the creation of electric ones.

Petaluma, California, has voted to outlaw new gas stations, the first of what climate activists hope will be numerous cities and counties to do so.

Expect more such ordinances, particularly in liberal towns. Grassroots groups are popping up with the mission of spreading this type of ban and forcing pollution cleanups at existing gas stations.

The movement aims to accelerate the shift to electric vehicles.

“This is not a ban on the existing gas stations, which are providing all the gas currently needed,” Matt Krogh, U.S. oil and gas campaign director for the environmental group Stand.earth, tells Axios.

“The problem with allowing new gas stations is we don’t really need them and they’re putting existing gas stations out of business.”

Driving the news: In Petaluma — where neighborhood opposition to a new Safeway gas station prompted years of litigation — the council voted unanimously last week to move forward with a permanent ban on new stations; a final vote will happen Monday.

“The city of roughly 60,000 people is host to 16 operational gas stations, and city staff concluded there are multiple stations located within a 5-minute drive of every planned or existing residence within city limits,” per the Santa Rosa Press Democrat.

The city councilor who introduced the measure, D’Lynda Fischer, is quoted as saying: “The goal here is to move away from fossil fuels and to make it as easy as possible to do that.” (source)

This idea of “banning” the construction or renovation of one type and “encouraging” another bears a semblance centuries ago to what was common practice in the early days of Islam, where invaded and conquered peoples were forbidden from building new churches or repairing old ones, but were allowed and encouraged to build mosques. The parallels between these two false religions- Islam and climate worship -share this interesting overlap in that they are different times and ideas, but both false and leading to, using the cover of law, the enforcement of a false end.

It will be interesting to see what ‘side’ is eventually favored. Given the political patterns in the US, it is likely that the Republicans will oppose it, and then with time they will change to ‘support’ it because of ‘compromise’ or something else, while the Democrats will, as they usually do, push full ahead with it. However, regardless of political side, this will be something to watch, along with the development of ‘superbatteries’, as the two will work side-by-side, possibly with growing urbanization, in order to create ‘supercities’ run by the expanded use of electric vehicles and, if one adds carbon taxes to this in the future, to further see a decline in rural life, as ‘country’ people will be pushed to cites for economic reasons, while larger areas are left to neglect.

Christians In Yemen, Or Pulling The Wool Over The Eyes Of Christians?
Will Biden Kill the Internet And Blame Trump?
Follow