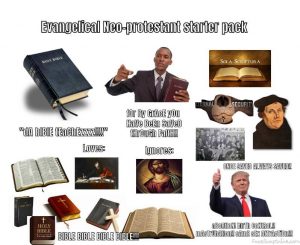 In the US, ‘Christianity’ almost in all cases must be put in ‘quotes’ of some from, because it frequently cannot be separated from nationalistic impulses, to which many often subjugate themselves. However, American Protestantism, which largely is constituted of the ‘Evangelical’ category, is in a growing crisis as the synthetic relationship interwoven between its identity and nation is fraying.

Outside the Capitol insurrection in January, a group of protesters carried a large wooden cross and a flag flew reading “Jesus is My Savior, Trump is My President.”

Like other White evangelical Christians — a reliable Republican voting bloc for decades — they saw their support for President Trump rewarded with conservative judicial nominees and policies promoting “religious liberty.” But hundreds of evangelical leaders have condemned the “radicalization” emerging among those who identify as Christian nationalists.

The debate over what role religion should play in public life has never been more contentious, with some promoting a vision of Christian primacy that critics say tramples on the rights of everyone else. (source)

The Catholic Church has the same problem in the US. It is just more obvious, and also, more easily fixed because the Church is inseparable from history, going back to Sacred Scripture and Sacred Tradition, which while the former can be abused, the latter is forced to be ignored along with all of history’s records in order to create a manufactured identity.

The Catholic Church has her issues, but they have largely been dealt with, as many people have left, and those who have stayed genuinely care for the most part.

This is not so for the Protestant world, because of the issue of nationalism, a problem that has always existed in Christianity, but is unable to be separated from the Protestant Revolution. The question is simple- can one be a good citizen and not a Christian? If the answer is yes, then Christianity is separable from national identity, and if so, then tying Christian identity to nationhood is not only a form of idolatry, but results in the proliferation of endless heresy because is says that the authority of divine revelation is subject to and should submit to the dictates of a human created political entity. This was the basis of many controversies in Church history, going back to the Apostles through the various crises of different types of ‘simony’ to the Investiture Crisis and on.

Christianity is going into eclipse in the US because it has been there for a while, just that few have realized it. This is going to hit the Evangelicals very hard, and could result in a trend of more than average numbers of churches closing, ‘ministries’ shutting down, and the outright scorn or open disdain of Christianity in the public. It will affect Catholics too, but because of the theology and history of the Church, she will survive, even if in a much reduced form. The same cannot be said about the Evangelicals, who just may be on the march to a footnote in a history book. This is not just the white bloc, but all racial blocs, since the so-called heralding of a “Latino Christianity” (as though the Spanish were neither Christians nor did they do most of the work in converting the heathen native tribes while it was largely Anglo-American, guitar-playing Protestant subversives who worked to condemn the Catholic Church while vacuuming the few pennies out of the poor men’s pockets and promoting Malthusian policies) has been noted to be mostly isolated to the older generations, and the younger members are secularizing even faster than the white bloc in a historical sense.

There will likely be a trend of attempted ‘pushback’ against the secularization, but in true American ‘Christian’ form, it will be too little and too late. Instead, it is rather to watch the trend of secularism to continue and with that, for the Christians who believe, to consolidate their faith into a more cohesive, serious bloc that, like in the days of the real early Church, will not be a bunch of people singing cheesy pop songs where worship arguably constitutes a poor excuse for a music concert, but real hymns as a hated and yet at the same time, intriguing minority who chooses to live a life against the values of the current times for the pursuit of something greater.

In other words, a lot less of this:

And a lot more of this:

Or in other words, real Christianity, and not American chicken-fried heresy masquerading as religion.

The Markle Crisis Is More Than Just Showbusiness, It’s Politics That May Threaten The Monarchy Itself
France Bans Génération Identitaire
Follow