You are here: Home › The Markle Crisis Is More Than Just Showbusiness, It’s Politics That May Threaten The Monarchy Itself 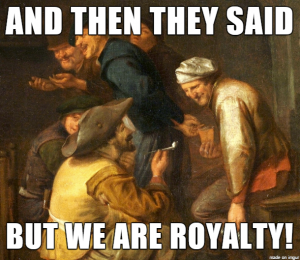 Right now, the British Royal Family is abuzz with talk of “investigations” against former royal and current wife of former Prince Harry, Duke of Sussex, over claims that Markle abused two staffers and Markle shot back on Oprah that she was the victim of a smear campaign by the Queen.

Mr Knauf’s email, alleging that the Duchess’s intimidating behaviour had driven two personal assistants out of the household, reopens a rift far more critical and damaging for the future of the monarchy: the split between Harry and his brother, Prince William.

But last night the email had an even more shocking immediate effect.

Stung by Meghan’s astonishing statement in response to allegations of bullying — that she was the victim of a ‘smear’ and that the newspaper that published the email was ‘being used by Buckingham Palace to peddle a wholly false narrative’ — the Queen hit back.

Announcing an inquiry into the claims about the two employees who left their jobs and a third whose confidence was said to have been undermined is an astonishing development.

Never before has the Palace held a member of the Royal Family to account, and its move represents a serious blow to the Duchess’s carefully curated status of victimhood.

It also shows that the Queen’s deep reserve of patience for her grandson, Harry, has reached a tipping point.

The move was not just a result of the incendiary remarks of the Sussexes’ American public relations team, but also because of the implications that the Palace could face legal action over nothing being done when the complaints were first raised. In other words, a cover-up.

I also understand that individuals who fear their reputations will be damaged in the Sussexes’ upcoming Oprah Winfrey TV interview have demanded the protection of the Palace.

‘The Palace is taking the gravity of the situation extremely seriously,’ I am told. (source)

Interesting news, and not at all because of celebrity, but because of politics.

Arrogance and celebrity aside, there are a few points to note here.

The British Royal Family and really, the English/UK monarchy as a whole has a long, long history of engaging in notorious behavior for the establishment and perpetuation of their own power. Remember that the real ‘power’ of the UK monarchy in any modern sense can be traced to Henry VIII, when in the name of power and nationalism, he ordered the extermination of the Catholic Church from Albion and the seizure of all monasteries and the forced nationalization of the churches. The Church had been in Albion since the first century, and yet even after the genocide of the Picts by the heathen and quasi-Christian Saxons in the 6th century, the Church survived and rebuilt. It was not the Moslems, but the heretic monarch and his acolytes who nearly exterminated the Church, with the only Catholics who remained in any presence were those who fled to the outmost, most difficult to reach areas of Scotland and accepted poverty and misery than heresy, and were it not for the incredible difficultly which they put themselves it, it is likely that the monarch would have had them hunted down and exterminated as well. It is also not a surprise that shortly after, the monarchy began a sharp increase in power around the world, nor is it a surprise that evil such as Cabbalism immediately appeared around the royal court and men such as the dual spy and occultist John Dee as well, for the monarchy and much of the nation seemingly in agreement exchanged salvation and eternal life for temporal power.

But this is not the only scandal. As I have noted, the Anglosphere has a notorious history of lying (this compares with the Russians, who cannot lie to save themselves, but are the unquestioned masters of bluffing and are able in this regard to practically run circles around the Anglosphere), thus making the UK the literal “ground zero” for the lying and propaganda that comes out of the Anglosphere, for while America may be a larger nation and perhaps tell more now, the UK has a longer history with a different type of involvement, as America largely rode as the successor to the English global dominance. Likewise, when I speak of lying, I am not saying that everything done was maliciously intended, or that the monarchy has done no good at all. However, they did not become the “global king” by mercy, kindness, or Christian morality, but likely the opposite, for as the Bible notes, if the devil is ruler over the kingdoms of the world, and he blasphemously offered God Himself the ability to “rule” in exchange for worship of him, how much more would the same be done to a man who desired such power, and likewise, one can only wonder what the effects of accepting such an offer would be in terms of those that are visible and tangible to a general public observer. One only needs to look at a very short period in recent times to see such a machine of lying and deceit in action.

Then there are other examples of ‘suspicious’ incidents involving the family, the most recent and infamous one being the ‘death’ of Princess Diana, for while many call it “conspiracy theories”, there are just as many and perhaps even more questions and questionable circumstances surrounding her death than there are even in modern times with the recent ‘death’ surrounding Jeffrey Epstein.

The list could go on, but this is not about “attacking the royals”, but rather noting patterns of behavior in a summarized way. When we look at this, therefore, while there is much that can be said about Markle- including how there are more than a few questions about various photos of her taken aboard a yacht in 2013 amid claims, many of them seemingly having ‘disappeared’ about her work as a ‘yacht girl’ and by extension not unreasonable questions about prostitution (along with sordid photos) -this does not detract from her ability to be honest. As I have said before, and while one cannot definitively confirm that she was absolutely a prostitute, if we assume this for the sake of argument (without asserting it as fact), knowing that prostitutes provide often a unique insight into the world because they see the good, bad, and ugly of society in a very intimate way through their work, Markle may be providing an insight into something deeper, which is a crisis in the royal family that threatens the survival of the monarchy itself.

We know for a fact that there is a lot of talk about abolishing the monarchy, and that there are a lot of people who are angry with the monarchy in the UK. This includes both “native British” as well as the many people of diverse backgrounds in the UK, such as Afro-Caribbeans, Arabs, Pakistanis, Indians, Bengalis, Chinese, Africans, and even Latin Americans, whose disagreements cover everything from racism to occultism. In all cases, there seems to be a serious concern- just Google search “abolish UK monarch” to see it -that a lot of people have about the monarchy, and they don’t like not just their history, but the lavish lifestyle, the expenses, the seeming unaccountable nature they have, and how many people feel frustrated, getting poorer, less happy, and just miserable.

Right now, the Queen- who many observe seems to have an almost unnaturally long life -is what is keeping the “British Empire” together, for while England does not directly administer territories such as she did before, she controls nations with the US through financial manipulation and selective revolutions. There is a fear- something that has been kept quiet but is discussed -that the monarchy could be abolished, possibly by violence. Indeed, the UK monarchy is the last serious monarchy in Europe (i.e. has major power), and it is not unreasonable to point out how this was likely kept by sacrificing his German and most infamously, Russian cousins in the 20th century to the Socialists.

When the queen dies could England perhaps go the way of France in the 18th century? It is entirely possible.

I don’t wish this for England, but history has a very nasty habit of repeating itself.

One cannot be sure of what is happening, but one may wonder if perhaps this tussle between the Crown and a rogue grandson’s wife is more than just a celebrity clash, but in the minds of the Queen, is a possibly direct threat to the continuity of rule for the crown and that given the state of the monarchy, they are trying to ‘deal’ with the situation in a way that makes them look best while disposing of the problem.

One cannot know for sure, but given the rise of nationalism in the UK, the changing demographics, and the threat of war, it will be important to watch the trends of popular sentiment and response to the crown, since it could have major impacts on the future of the UK