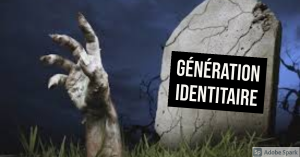 As politics in Europe continues to shift to the right again, seeing a rise in nationalism and tribalism, France24 reports that the nation has now banned the popular group Génération Identitaire (Generation Identity) over concerns of anti-migrant beliefs and racism.

France on Wednesday banned far-right group Generation Identity (Génération Identitaire), which is known to be hostile to migrants, for incitement to discrimination, hatred and violence, Interior Minister Gérald Darmanin said.

“The association ‘Génération Identitaire’ was dissolved this morning at a Cabinet meeting, in line with instructions from the President,” Darmanin said on Twitter.

“As detailed in the decree I submitted, it incites to discrimination, hatred and violence.”

Generation Identity has repeatedly tried to bar migrants from entering the country, conducting high-profile raids in the Alps and the Pyrenees.

On February 13, Darmanin announced that he had triggered procedures to ban the group in response to a series of anti-migrant actions.

He had already raised the possibility of dissolving the far-right group in late January when it deployed around 30 activists on the Spanish border, with cars bearing the message “Defend Europe” and the use of drones to police the frontier – the latest in a series of stunts Generation Identity has used to attract the French public’s attention. (source)

Shoebat.com has written about Génération Identitaire before, and indeed, she runs in the same philosophical and political circles alongside many contemporary promoters of tribalism and eugenics. She is simply the French version of what is happening in many other countries across Europe.

However, this ‘ban’ really does not mean anything. In fact, not only will it have no effect stopping it, but because the trend is already there for nationalism and in such a case of a popular movement that banning such can increase support, it is likely that one will see an increase in support for the group, which may indeed be the purpose, albeit unstated and subject to verification, of this ban.

Evangelical Identity Crisis Worsens As America Becomes Less ‘Christian’
Baltimore Schools Are So Bad A 0.13 GPA Puts You In The Top 50% Of Students
Follow