You are here: Home › Enjoy The Summer, Because When Fall Comes, The COVID Axe May Drop 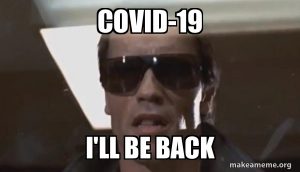 I have said it before, and I will say it again, that there is a dual nature to the COVID crisis. Half of this is political, and half of this is medical. When I say “half”, I do not mean a literal half, but to express to issues existing in the same whole that while taking on more or less importance at various times, are bound to each other. There is truly a medical side- I have seen it from people, including one friend whose father is a nurse that works in a critical role in a major hospital who contracted and survived COVID after a serious fight with it -and a political side seeking to use the crisis to institute long-term changes far worse than what the virus has brought or done. Both are important, both should be emphasized, and both should be scorned and discussed in reason, as the truth does not know only one side to imbalance, but is often the most balanced view among many.

As various vaccines for COVID are being developed, to the south of the US, in the regional power of Brazil, a new ‘super COVID’ variant is spreading, with no known way to stop it.

More than a year after a spiked virus launched a murderous campaign across the globe, most countries have put the worst behind them, aided by aggressive government policies and vaccines.

The continent-sized nation of 212 million is facing more Covid deaths and cases than ever, its hospitals overflowing, its policy in disarray, its vaccine supply severely limited. In addition to a president who scoffs at the disease, rejects masks and leaves each state on its own, the country plays host to a variant that’s more contagious and possibly deadlier.

Nothing better illustrates the bizarrely fractured nature of Brazil’s Covid policies — and how they’ve sowed confusion and anger and suffering — than three cities along a 140-mile roadway in the state of Sao Paulo, where three distinct approaches to the pandemic coexist. In one, practically anything goes; in another, it’s full lockdown; and in a third, mass vaccination is underway. Each is a mess, overrun by rampant illness and mired in a deep economic funk that shows no signs of ending anytime soon.

“What we’re living through now is much worse than what we had before,” said Denise Garrett, an infectious disease expert and vice president of the Sabin Vaccine Institute in Washington. “I see a huge storm forming in Brazil.” (source)

Now as far as COVID vaccines, while one should use judgement, I would say that simple logic seems the best answer is to wait before getting one, and this story is proof of it in so far as to say, why would one want to take a vaccine for something that MAY (but not clearly so, from what I understand about the seemingly conflicting studies on the issue) stop some forms of this virus, but it keeps mutating so quickly it becomes ineffective? When one considers too there are possible issues related to health, and effects being reported from people about problems (especially among women) related to reproductive issues, and considering that masks and distancing with good handwashing procedures seem to have been effective at reducing the spread of disease, why does one need to rush for a vaccine that is unproven, minimally tested, and is a possible health hazard?

Again, I am not a medical professional, but just an individual thinking about this and explaining the questions I have from simple reasoning.

But more importantly, if one has a feeling that something looks ‘familiar’, it is because trends appear to be the SAME as last time.

Remember, there were studies suggesting a medical link between COVID and Vitamin D, or just being out in the sun basically. What this means, for our purposes, is that it seems that more sunlight exposure means less COVID spread, and that happens most in the summer.

This super COVID is coming to the US. There is no question in my mind, because of the large number of Brazilian migrants and expats in the US, and the large numbers of American tourists to Brazil. It is coming, like it or not, and it probably is already here and just incubating.

Summer will keep it under control. But like last year, when fall comes around, there is a chance it means GAME ON, or expect not just another round of COVID, put possibly a worse one with more lockdowns, shutdowns, and so forth. It may even be worse than last year.

Make no mistake, I’m not saying this just on account of disease. I’m saying it will likely be assisted too by human actions, or that there is no political side to it. COVID is extremely political, and the political effects of COVID will long outlive the existence of COVID, the same as what happened with the Spanish Flu, except this likely will be far worse, not for the disease, but the effects it will have on the world.

So enjoy the summer. Have a great time, but like the grasshopper and the ant, prepare, because when the fall comes, there may be a “round two” of fall 2020, and far worse.

Report: The World Is Running Out Of Sand
Trump Appointee Arrested By FBI For Attacking Police Officers
Follow