You are here: Home › Report: The World Is Running Out Of Sand 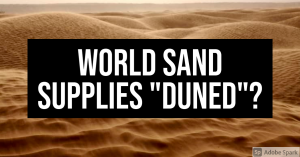 It’s basically worthless, but in another sense, it is worth everything, for as far as material commodities go, sand is critical to industry around the world as far back as ancient times, as not only is it useful for building but is vital for glassmaking, abrasion work, and many other areas. However, MSNBC reports in an interesting analysis that there is a ‘global sand shortage’ emerging.

An insatiable global appetite for sand, one of the world’s most important but least appreciated commodities, is unlikely to let up anytime soon. The problem, however, is that this resource is slipping away.

Our entire society is built on sand. It is the world’s most consumed raw material after water and an essential ingredient to our everyday lives.

Sand is the primary substance used in the construction of roads, bridges, high-speed trains and even land regeneration projects. Sand, gravel and rock crushed together are melted down to make the glass used in every window, computer screen and smart phone. Even the production of silicon chips uses sand.

Yet, the world is facing a shortage — and climate scientists say it constitutes one of the greatest sustainability challenges of the 21st century.

“Is it time for panicking? Well, that will certainly not help, but it is time to take a look and change our perception about sand,” Pascal Peduzzi, a climate scientist with the United Nations Environment Programme, said during a webinar hosted by think tank Chatham House.

Peduzzi, who is the director of UNEP’s Global Resource Information Database in Geneva, Switzerland, described the global governance of sand resources as “the elephant in the room.”

“We just think that sand is everywhere. We never thought we would run out of sand, but it is starting in some places. It is about anticipating what can happen in the next decade or so because if we don’t look forward, if we don’t anticipate, we will have massive problems about sand supply but also about land planning,” he added.

At present, it is not possible to accurately monitor global sand use. However, Peduzzi said it could be measured indirectly, citing a “very, very good” correlation between the use of sand and cement.

The UN estimates that 4.1 billion tons of cement is produced every year, driven primarily by China, which constitutes 58% of today’s sand-fueled construction boom.

The global use of sand and gravels has been found to be 10 times higher than that of cement. This means that, for construction alone, the world consumes roughly 40 to 50 billion tons of sand on an annual basis. That’s enough to build a wall of 27 meters high by 27 meters wide that wraps around the planet every year. (source)

Now, I call this to be a rather laughable report, but in another sense, it is true if one considers the control over commodity use as a matter of politics.

There is no shortage in the world of oil, gas, food, or resources, and likewise, there is no overabundance of people. The world, made by God, has more resources than one needs and never enough people to occupy said resources. Yes, there are scarcities that naturally happen, but the more scientific analysis that one views, the more one realizes that the world really is an amazing place with so much potential and of which its potential is most negatively affected not by “the environment,” but human behavior seeking power over the good will of one’s fellow man.

Sand is not in short supply. Rather, it is mercy in short supply and a willingness to care for the good will of another that is lacking. It is such an attitude that can lead to “supply chain” shortages by not natural effects, but unnatural manipulation or if there is a natural issue, than the exaggeration of natural effects by unnatural means, such as the Irish Potato Famine and the Holodomor, both of which had natural effects but for which said effects could not have reached the destructive levels they did without direct and continual human intervention for political purposes.

Considering the current “food shortages” and now “gas shortages” (when hardly a year ago gas was being dumped into the environment due to ‘oversupply’), these so-called ‘sand shortages’ will be something to watch, and to see if they become bigger because they will have a political impact if it worsens, as it could directly affect industry, which in turn affects the economy, and with that the stability of the financial system.

Baltimore Schools Are So Bad A 0.13 GPA Puts You In The Top 50% Of Students
Enjoy The Summer, Because When Fall Comes, The COVID Axe May Drop
Follow