You are here: Home › Massive Famine May Happen In Yemen, Worse Than What Is Now 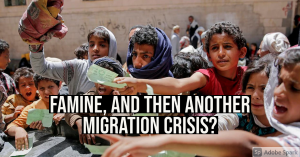 Yemen, a small Arabian nation of 29 million near the horn of Africa in the Arabian Peninsula, is suffering gravely from war with Saudi Arabia and an already existing food crisis. However, according to Euronews, there is a possibility she may see a famine, as the nation is already suffering gravely.

Yemen faces a famine on the scale of Ethiopia’s during the early 1980s that left 1.2 million people dead, according to the Secretary-General of the Norwegian Refugee Council, Jan Egeland.

Speaking ahead of an International Donors Conference on Yemen designed to address a humanitarian crisis in the war-torn Middle Eastern nation, Egeland warned that 16 million people currently need aid in the country at a cost of more than $4 billion (€3.3 billion).

“I am shocked [by] what I have seen in Yemen,” Egeland told Euronews from Hajjah, one of the areas of the country worst hit by the conflict between the Houthi government and a coalition of Arab states led by Saudi Arabia.

“I met mothers with skeleton children. They told me that since food rations were cut by 50 per cent last year they could not breastfeed them anymore,” he said.

“I met a mother that said that she had [lost] five children. She had 14 children and there were nine left. One of them could not walk, she was nine years old and she looked four.”

Egeland said that if the conference did not raise the funds needed to address the crisis, “we will see a famine here like the world has not seen since the 1980s in Ethiopia.”

If Yemen sees a famine, watch out, because in combination with the current humanitarian crisis in Tigray, which I hope to have a more substantial piece about, it is very likely this will trigger a greater migration crisis than what happened in 2016. If this happens, it will likewise feed the fires of nationalism, racialism, and incline the world further towards war and conflict.

Pope Francis Has Meeting With Major Shiite Cleric, Invites Jews But They Do Not Attend
Prepare For Another Migration Crisis As Now Senegal Has ‘Apocalyptic’ Protests Throughout The Nation
Follow