You are here: Home › Pope Francis Has Meeting With Major Shiite Cleric, Invites Jews But They Do Not Attend 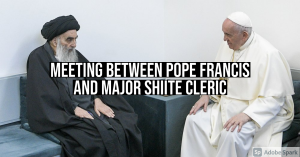 We have always opposed Islam at Shoebat.com, and done so in the context that Muslims, like all men, need Christ for salvation. However, reaching men with the Gospel can take a myriad of ways. Indeed, some of the best preaching is not necessarily screaming at people with a bullhorn or acting in ways that are ostentatious and draw attention but fail to effectively capture the minds of the people, for while such and approach is not always wrong, what matters the most is effectiveness, regardless of how that may look, to realize the same end.

To this end, it is an interesting witness- and one whose effects will be yet to be seen -is a meeting as reported by the Associated Press between major Iraqi Shiite cleric Al-Sistani and Pope Francis.

Pope Francis walked through a narrow alley in Iraq’s holy city of Najaf for a historic meeting with the country’s top Shiite cleric Saturday, and together they delivered a powerful message of peaceful coexistence in a country still reeling from back-to-back conflicts over the past decade.

In a gesture both simple and profound, Grand Ayatollah Ali al-Sistani welcomed Francis into his spartan home. The 90-year-old cleric, one of the most eminent among Shiites worldwide, afterward said Christians should live in peace in Iraq and enjoy the same rights as other Iraqis. The Vatican said Francis thanked al-Sistani for having “raised his voice in defense of the weakest and most persecuted” during some of the most violent times in Iraq’s recent history,

Al-Sistani is one of the most senior clerics in Shiite Islam, deeply revered among Shiites in Iraq and worldwide. His rare but powerful political interventions have helped shape present-day Iraq. Their meeting in al-Sistani’s humble home, the first ever between a pope and a grand ayatollah, was months in the making, with every detail painstakingly negotiated beforehand.

Early Saturday, the 84-year-old pontiff, travelling in a bullet-proof Mercedes-Benz, pulled up along Najaf’s narrow and column-lined Rasool Street, which culminates at the golden-domed Imam Ali Shrine, one of the most revered sites in Shiite Islam.

A religious official in Najaf called the meeting “very positive.” He spoke on condition of anonymity because he was not authorized to brief media.

The official said al-Sistani, who normally remains seated for visitors, stood to greet Francis at the door of his room — a rare honor. The pope removed his shoes before entering al-Sistani’s room and was served tea and a plastic bottle of water.

The Vatican said Iraqi Jews were invited to the event but did not attend, without providing further details. Iraq’s ancient Jewish community was decimated in the 20th century by violence and mass emigration fueled by the Arab-Israeli conflict, and only a handful remain. (source)

This is an interesting meeting. While few details are available now, it will be worthwhile to see if and if it does, how the effects of this meeting may influence policy, trends, ad the actions of other actors, including the US, Israel, and European Union or NATO, in the Middle East and around the world.

Study: Californians Moved, But Mostly In-State
Massive Famine May Happen In Yemen, Worse Than What Is Now
Follow