You are here: Home › Prepare For Another Migration Crisis As Now Senegal Has ‘Apocalyptic’ Protests Throughout The Nation 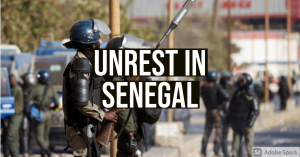 Senegal is a West African nation on the Atlantic coast that for all the troubles that African nations are known to have, is comparatively more ‘stable’ than others. However, according to the BBC, Senegal is now going up in flames amid a nationwide crisis being described as apocalyptic.

A top Senegalese official whose job is to settle conflicts has said the country is on a dangerous precipice after four days of protests left at least five young people dead.

Alioune Badara Cissé, known as the mediator of the republic, urged the authorities to stop threats and intimidation against protesters.

He also called for those on the streets to act peacefully and stop looting.

The unrest was triggered by the arrest of opposition leader Ousmane Sonko.

He denies the allegations and his supporters say the accusations are politically motivated.

The protests have also been fuelled by economic inequalities and concerns over young people’s standard of living.

In a press conference on Sunday, Mr Cissé said the authorities “need to pause and speak with our youth” and warned that “we are on the verge of an apocalypse”.

His statement came a day after a teenager in the southern city of Diaobe became the fifth person known to have died in clashes with security forces in various parts of the country.

But the respected mediator is warning of much more turmoil ahead unless the government acts fast to address the deepening poverty and lack of job prospects for the youth, says BBC World Service Africa Editor Will Ross. (source)

I said this before, and I will say it again- there is a major migrant crisis in the works right now.

All of the nations from Senegal to Eritrea- and the full breadth of the Sahel region in between -is being violently ripped apart by wars, conflicts, and millions are displaced. These people have no hope, no future, and are just miserable, and now Yemen is being ripped apart even more in the Arabian peninsula.

Nothing good is going to come here. What you are seeing is the set up for another mass exodus of people. And where are they going to go? North most likely- towards Europe as what happened in 2015 and 2016. However, this time it will be tremendously larger and more serious should it happen. This also means an equally, proportionally speaking, increase in nationalism, racialism, and a likely transition towards militarism, along with increasing economic instability that will just feed the entire cycle of chaos.

In other words, nothing out of the ordinary from what we at Shoebat.com have been warning about. It is simply just an advanced stage of the same cancer with the same end, and that is death to millions of innocents in a global war for power at all costs with respect to none.

Massive Famine May Happen In Yemen, Worse Than What Is Now
Of Course It’s The Debt, Because It’s Just Playing Economic Musical Chairs At This Point
Follow