You are here: Home › Study: Californians Moved, But Mostly In-State 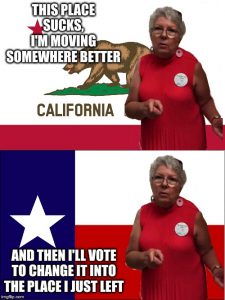 It has been reported for a while that hordes of destructive, arrogant, entitled refugees who overwhelm prosperous regions of the US and turn it into an expensive, socially-broken, morally-diseased, filth-covered hellscape which they previously attempted to flee from- also known as Californians -have been invading Texas and other states such as Utah, Idaho, Montana, Arizona, and New Mexico in giant numbers. However, as CBS News Sacramento reports, the numbers of people leaving the state are not as high as thought, with most people merely relocating to other parts of California and away from others, such as the San Francisco Bay area to anywhere else that is less expensive.

A popular notion that there was a mass exodus from California last year is wrong, according to research from a nonpartisan think tank.

Most moves during 2020 happened within the state, the California Policy Lab said Thursday.

Departures from the state were consistent with historical patterns but the biggest statewide change was fewer people moving into California, the lab said in a press release.

The researchers used a dataset of quarterly credit bureau information called the University of California Consumer Credit Panel to analyze where people from each county moved after the coronavirus pandemic struck a year ago.

“While a mass exodus from California clearly didn’t happen in 2020, the pandemic did change some historical patterns, for example, fewer people moved into the state to replace those who left,” author Natalie Holmes said.

“At the county level, however, San Francisco is experiencing a unique and dramatic exodus, which is causing 50% or 100% increases in Bay Area in-migration for some counties in the Sierras,” Holmes said.

Net exits from San Francisco between the end of last March and the end of 2020 increased 649% as compared to the same period in 2019. About two-thirds remained within the 11-county Bay Area economic region, and 80% stayed in California. (source)

The report makes some good observations. It should not underemphasize the true fleeing of California migrants from their destructive behavior. However, such a report does give balance and clarity to a situation that is often not given careful study.

When people talk about migrants, the tendency is to blame “foreigners”, when often times, the most destructive form of migration is intra-national fighting between people that subscribe to the “same ideas” or unit. One can see this in the US in the majority-black communities, where it is not “police” murdering scores of people, but almost entirely (about 92%) black males, mostly under the age of 35, murdering other black men over everything from girlfriend disagreements to sneakers, to a piece of pastry bought at the corner store (as one may recall from the famous “Pound Cake speech” given in 2004 by Bill Cosby addressing the epidemic of black-on-black violence). It is true that “Mexican drug pushers” do cause problems, but one also may not want to forget the armies of men with names such as “Travis”, “Bubba”, and “Earl” in majority white areas who do everything from producing or distributing large amounts of drugs such as methamphetamine to their own communities.

When there is a problem in a nation, the trend is naturally for most to blame a person or a thing that is not the self, and while such may be true, it often is limited, because most of the problems ultimately begin and end with the self.

The California migrant issue is a serious one, but ultimately it represents a problem in the current American self-perception that is not unique to California, but that California represents a more metastized form of the same cancer that is infected in the whole body of the common man, be he a citizen of California or not.

Senate Passes COVID Bill Opening The Way For Biden Bucks, Just Like I Told You It Would
Pope Francis Has Meeting With Major Shiite Cleric, Invites Jews But They Do Not Attend
Follow