You are here: Home › Hopes Crushed For Those Who “Trust[ed] The Plan” From “QAnon” After Supreme Court Rejects Final Appeal On 2020 Election Results 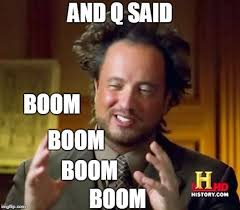 Love him or hate him, and regardless of the genuine irregularities and questions that existed, just like the Bush 2000 “victory” with five questionable counties in Florida supporting Bush, so the same but for five states supporting Biden clearly indicated that Biden was going to be elected or selected as the next President. Many people disagreed with this and tried to fight it, but the trends after a short while seemed clear. However, in spite of months of fighting for “#MyPresident”, the Christian Post reports that the fight is over as the Supreme Court is refusing to hear future challenges about Trump’s non-election.

The U.S. Supreme Court has declined to hear the Trump campaign’s lawsuit against the Wisconsin Elections Commission over its handling of the 2020 election, dealing the final blow to his election legal challenges.

In an order released Monday morning, the Supreme Court allowed for a lower court decision in favor of the elections commission to stand. The case was Trump’s final remaining legal appeal of his three challenges to the results of the 2020 presidential election.

At issue was a unanimous opinion by a three-judge panel of the Seventh U.S. Circuit Court of Appeals released last Christmas Eve. The appellate court ruled that Wisconsin lawfully appointed its representatives for the Electoral College.

The case dealt with whether the Wisconsin Elections Commission and local election officials violated federal law by implementing unauthorized absentee voting practices inconsistent with state law and whether the state’s election should be declared void.

The Seventh Circuit’s three-judge panel, which consisted of three Trump appointees, had previously ruled that “the errors that the President alleges occurred in the Commission’s exercise of its authority are in the main matters of state law.”

“They belong, then, in the state courts, where the President had an opportunity to raise his concerns,” the lower court’s majority opinion states.

“For our part, all we need to say is that, even on a broad reading of the Electors Clause, Wisconsin lawfully appointed its electors in the manner directed by its Legislature.”

Democratic presidential nominee Joe Biden defeated Republican incumbent Donald Trump in an election held during the coronavirus pandemic. Biden narrowly beat Trump in the battleground state of Wisconsin, which Trump won in 2016, by about 20,000 votes. (source)

This is the end of the line for the hopes, as expressed by many of the so-called “Qanon”-ites, that Trump would mysteriously get back into power.

What will be interesting to see from this is the future development of the GOP. There were several paths the GOP could and still can take, but the current trajectory is interesting, as the cult-like status to which Trump has been elevated could have multiple paths. Basically, the question is, what is the future of the GOP? Will the trends lean towards a new party, or will that new party become at least temporarily, a “party of Trump”?

One does not know for sure what will happen, although the latter is so far the current state of affairs from what it seems.
‘

Of Course It’s The Debt, Because It’s Just Playing Economic Musical Chairs At This Point
Biden Brain Bust On Television, Forgets The Name Of The Pentagon And Secretary Of Defense Name
Follow