You are here: Home › Of Course It’s The Debt, Because It’s Just Playing Economic Musical Chairs At This Point 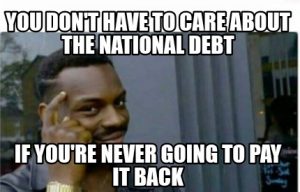 With a third stimulus check likely on the way, The Hill reports that the talk of “free money” is not actually free, but is, as I have warned, coming at the ballooning of the Federal debt that is going to cause far more economic problems than anything it pretends to solve.

While there are undoubtedly Americans in distress from the pandemic, a short-term fix should be made with full knowledge of the longer-term economic issues that the country faces. As the effects of the pandemic appear to be retreating, the firehose approach to economic assistance should be jettisoned and replaced with targeted assistance. The more pork and unnecessary subsidies that Congress includes, the closer we get to our next financial panic given the context we find ourselves in.

What is that context? Take the bubble that no one seems to ever worry about — the national debt. It sits today at $28 trillion and is growing by the minute. Over the last quarter century, it has continuously been nurtured by Congresses and White Houses that seem to believe that there are no restraints on the country’s borrowing and spending power. That has necessitated an endless series of governmental actions that have distorted markets, which then of course requires further attention and adjustment as markets evolve, leading to even further market distortions.

Since interest rates hit 21 percent in the early 1980s, the Federal Reserve has taken increasing control of the economy, managing it through ups and downs. During the panic of 2008, the Fed rescued a reeling economy by purchasing, among other things, Treasury notes and mortgage-backed securities, ballooning its balance sheet from a meager $870 billion in 2007 to an eye-popping $4.5 trillion in 2014.

Even before the Fed could shed itself of that portfolio and return markets to “normality,” the pandemic of 2020 and the relief efforts enacted by Congress compelled it to increase its portfolio to a whopping $7.6 trillion. It is not clear how long it will take the Fed to unwind its current holdings, if it happens at all. This combination of relentless spending and borrowing has maneuvered the economy into a position that requires constant realignment by the government to avoid new catastrophic economic events.

But this is only the tip of the economic iceberg. The United States continues to borrow and print money at a furious rate. The money supply represented by checking deposits, cash and other financial figures is up an unprecedented 26 percent on a year-over-year basis. That means that about a quarter of all money in the U.S has been created in the last year.

This is not a sustainable course of action. The longer-term effects, which may include inflation, deflation, increases in interest rates, increased unemployment and devaluation of the dollar, will all trigger further governmental intervention and adjustments, which will lead to the need for yet further action. (source)

It doesn’t matter, because the issue we are dealing with is not money, but something cannot be printed, which is time.

Banks and government can print more money, at the cost of killing the purchasing power of the money they’ve issued. One can trade more hours for more money, but the extra money buys less, and yet still no matter how much more time we trade for more of this “currency”, it is impossible to overcome their power to create near-infinite currency, thus destroying the value of time and labor itself. Hence above, money always can be printed, but not time.

History bears out this patter, for there is a consistent pattern, done strictly for political expediency, where governments almost always choose to devalue its currency in response to debt an economic crises. It does not matter if money loses 90% or more of its value- such as what happened with the US dollar since 1915 -because it is about the image of political control that can be blamed on another person to justify a currency reset and continuity of power and government.

Currency devaluation should be looked as seriously as natural disasters be they floods, droughts, or food shortages, since the effects are the same on society in terms of causing hunger, homelessness, joblessness, and impoverishment.

In the American situation, money has been losing purchasing power faster than one can earn more of it to offset the losses. This represents a fundamental transformation, where even as recently as two generations ago, making 25% more money still added purchasing power to one’s income and that even includes with five to ten percent inflation added as well as taxes, one can still net at least ten percent additional purchasing power.

Yet all these gains are no longer existent. Right now, true price inflation but as a result of currency devaluation is probably about 20% at least, taxes are significantly higher, and if one includes “hidden taxes” and then the standard currency debasement due to printing, it is no surprise that volume of money means less than the ability to use it to get what one wants, which has become exponentially more difficult. Thus being stuck with trading time for a continually and really unstoppable devaluing currency, the nation is poorer in not just money, but time, energy, and vital force.

Why then work for one’s needs in genuine labor? What is the purpose other than to waste oneself for diminishing returns? It is a logical question, leading people to engage in illegal, immoral or dangerous behaviors such as scams or exposing themselves to scams with a hope of earning a large return fast, such as speculative investments in dangerous ‘asset’ classes as certain stocks or currencies that may be scams themselves. All of it is ultimately an attempt to outrace the devaluation of one’s assets, and thus turning economic ‘investment’ into just a giant casino where the winner is not based on skills but on cheating and a lucky fall of a die to the right side at the right time.

Ultimately, this system cannot go on. As I have warned, real stores of value are the best ‘safe haven’ because all systems overburdened by debt eventually collapse under them. In the case of the US- as with Germany, Russia, and other major nations -there is no “Mad Max” collapse, but a massive temporary devaluation followed by a “buy back” at usually a third-off discount to a new currency. In the US, it means that if you have a dollar in savings (as theory), you would essentially lose everything for a time to the point of worthlessness, and if you manage to hold onto your money in the crisis, when the government restores order, you would get 67 cents back into your account. No matter what the situation, the savers will lose.

I’m not saying go out and spend money. I’m not saying savings are bad. To the contrary, one should save, but just in the right assets- one that will appreciate in value as opposed to depreciate. Think of the difference between investing in a car (a constantly depreciating asset) versus a piece of good land or a bar of precious metals (things that at least retain value, or increase in value with time).

The debt is the obvious problem, but it is not going to be solved peaceably because it is not meant to be solved in such a way. It’s a problem that was created and allowed to fester for the purpose of manufacturing a solution, to increase the power of some at the expense of the many. Instead of arguing and bemoaning it, the smarter approach is to do something about it, which for the common man, means saving his assets and investing them in things that will bring a future return.