You are here: Home › Iranian Military Crossed Into Syria Marking The Launch Of The Long-Planned Road Between Tehran To Damascus And Then To Armageddon

By Shoebat Foundation on December 18, 2017 in Featured, General, Highlight 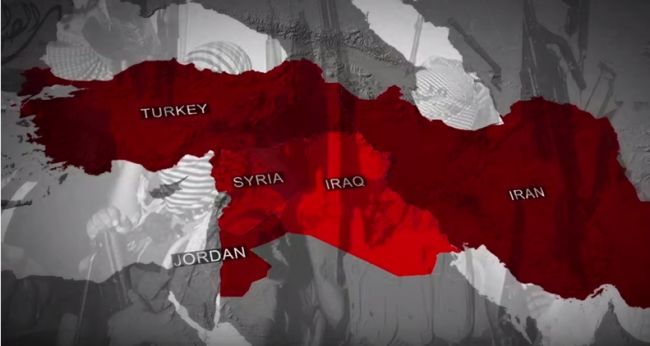 If one sees the red in the map above to being a leaping Leopard (Anatolia) or a Bear (Persia/Iran) it makes no difference;  Armageddon is a battle that magnetizes an army of hundreds of millions coming from an Iranian-Turkish alliance rushing into the Jezreel Valley. It can only happen when there is an access to Syria, then to the Golan Heights, and then to the Jezreel Valley’s Har-Megiddo. Armageddon cannot be accomplished without an access to Syria. In everything that happens in the Middle East, Jezreel (Armageddon) should be our main focus of attention since it is the main goal to sprint into northern Israel heading towards Jerusalem, a city we already hear the world rumbling about.

And today the mechanism of such access was officially activated.

“An Iranian military convoy has crossed into Syria through Iraq, possibly marking the launch of the long-planned road link between Tehran and Damascus, Iraqi officials and members of the military have told The New Arab.”

“Military sources stationed in the border town of al-Baaj said that the convoy carrying troops from Iran’s elite Revolutionary Guards and the Iranian-backed Hashd al-Shaabi paramilitary crossed into Syria this week.”

“The route – which provides Tehran unhindered land access to its allies in Syria and Lebanon – was secured this summer. The land route is the biggest prize yet for Iran in its involvement in Syria’s six-year civil war.”

How did all this happen? After the Bashar Assad regime and Iranian-backed Hashd al-Shaabi fighters (Popular Mobilization Forces) gained possession of the regions once occupied by ISIS near the Syria-Iraq borderline, military activity began at that line. This was the first time Iran dispatched military delivery through this route, by which Iran reached the Mediterranean.

Now, Iran has the opportunity to maintain its military presence in Syria a lot easier even getting closer to northern Israel.

With this, Iran has achieved milestones of leverage and influence that rival any regional power in the past half-century.

When US forces ousted the Taliban in Afghanistan and then toppled Iraqi dictator Saddam in 2003, they removed the two main strategic enemies on Iran’s flanks. With Iran’s backed terrorists inflicting heavy casualties against U.S. troops in Iraq,  this caused the US to withdrawal in 2011. The U.S. also contributed $5.3 billion in foreign aid to Iraq in 2016 alone after losing nearly 4,500 US soldiers. With the U.S. pull-out, Iran reached its new superpower regional status.

By 2014, Iraq’s Shiites through al-Hashad al-Sha’abi (Popular Mobilization Forces) became the ruling power in Iraq with Grand Ayatollah Ali al-Sistani issuing a fatwa calling on all able-bodied to take up arms as ISIS came close to Baghdad.

Only Saudi Arabia attempted to push back against Iran’s growing influence. This was without success. Crown Prince Mohammed bin Salman called Khamenei “the new Hitler of the Middle East”.

In Iraq, Iran controls every TV and radio station. All 28 political parties backing Iran’s Shiite militias will be voting in the 2018 coming elections. By 2018, Iraq, in reality, will belong to Iran.

In other words, by 2018, Iraq’s military will become Iran’s Hezbollah.

As we get closer to Armageddon, people should start changing their perspective. When the U.S. announces victory over ISIS, reality is, Iran has the victory over the U.S.

ISIS is exactly what Iran was looking for. As we warned for decades, the U.S. with its mediocre discernment about the Middle East is no match for centuries of Islamic deception.

But one has to look at the long term goals. Yesterday the talk was over Syria where Turkey, the U.S., Russia, Saudi Arabia where encroaching into Syria to only pull out handing it over to Iran, the terror state, that is making secret deals with Turkey to divide the entire region.

And today we hear rumblings over Jerusalem. Ezekiel 38 has Turkey and Iran lead an invasion into Israel. This will be via the Jezreel valley (Armageddon).

This year, east and west, sounded the trumpets of victory over ISIS in Syria, but as it turns out Iran was the victor. No one expected that Iran will cash in on its investment in Syria.

With ISIS, Iran was able to find the perfect alibi for its expansion. Today Iran works with the Taliban in Afghanistan. 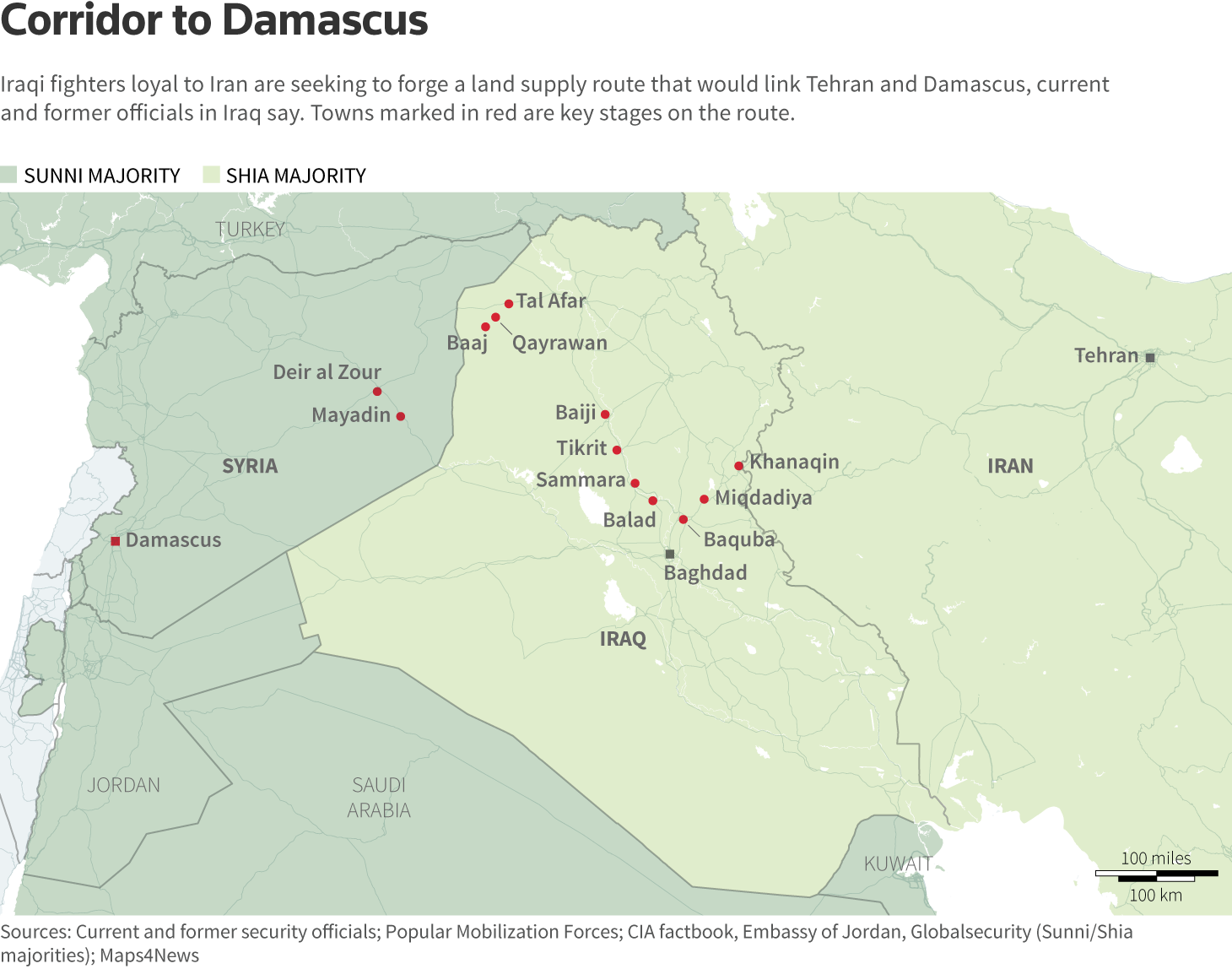 With such corridors, besides Sunnis and Kurds being under threat, Christians and Israel too will suffer. The Iran backed militia (Al-Nujaba) is already looking beyond the conflicts in Syria and Iraq. In March, it announced the formation of a “Golan” brigade to push Israel out of the Golan Heights, which Israel has occupied since 1981. 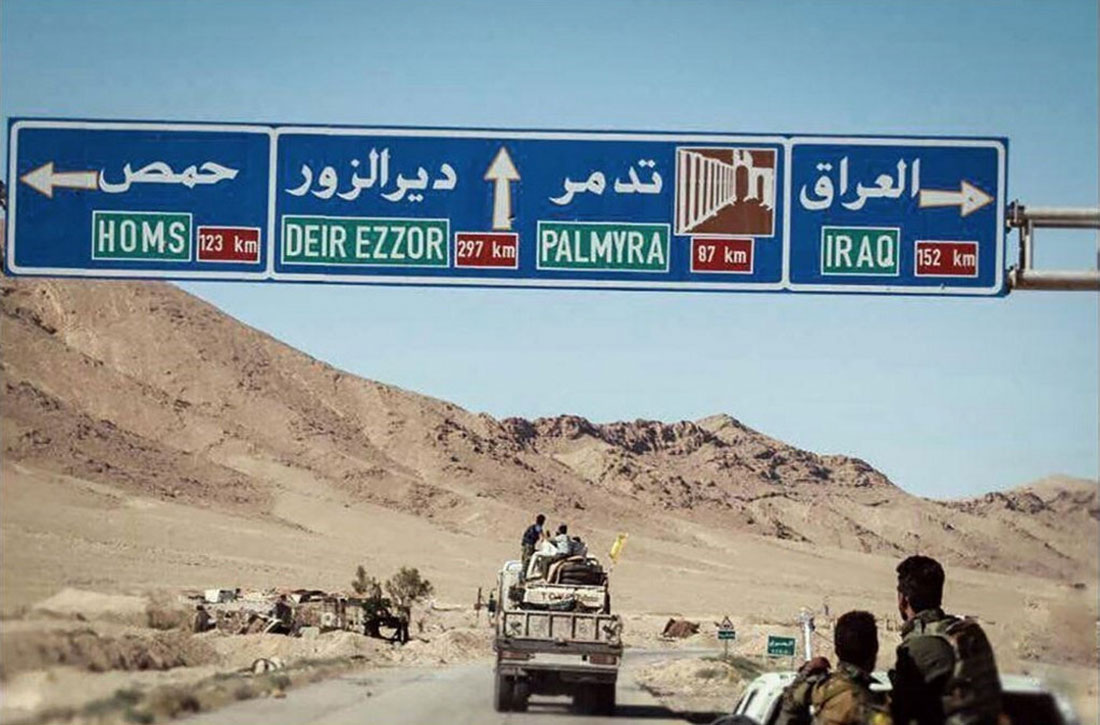 Nujaba fighters move their forces inside Syria towards Iraq.

Decades ago, when nothing was happening, I watched many focus on Armageddon. Now that something is happening, few focus on the daily fulfillments. The signs of the times is when virgins without oil are sound asleep.

The name Armageddon is a corruption of the Hebrew Har Megiddo (Mount of Megiddo) in Jezreel where more than thirty bloody battles have been fought during the past four thousand years by Egyptians, Israelites, Greeks, Muslims, Crusaders, Mongols, British, Germans, Arabs. From Thutmose III, Deborah, Gideon, Saul, Jonathan, Jezebel, Saladin, Napoleon to Allenby, Megiddo was the ground zero for battles that determined the very course of civilization.

This is why John (the author of Revelation) has this battle determine the outcome of the war between the forces of good and evil. The litmus test to knowing which side you are on is simple: what is your position on Jerusalem? Would you prefer its tops to have the Crucifix or the Crescent?

In Islam, it is believed that the turning point of the battles will be with the West at a place called Al-A’maq or Dabiq in Syria.

Muslims will unite over Dabiq. This is why Turkey says nothing about Iran’s expansion towards the Mediterranean since Dabiq, is the name of the battle the Ottomans won which paved the way for their occupation of Iraq and the Levant for more than four centuries. For Muslims, Dabiq (Syria) is the springboard for the Islamic armies to fight the Rum (Romans/Catholics) in their quest for world domination.”

In the Hadith it says: “The Final Hour (of history) will not be established until the Romans land at either al-A’maq or at Dabiq.” While Muslims believe that al-A’maq is in the Syria/ Turkey border, there is another spot with the same Semitic name: Migdal HaEmek. But this (HaEmek) is a city in the Northern District of Israel at Megiddo. Emek or A’maq means the same thing: “the gorge” or “the split” 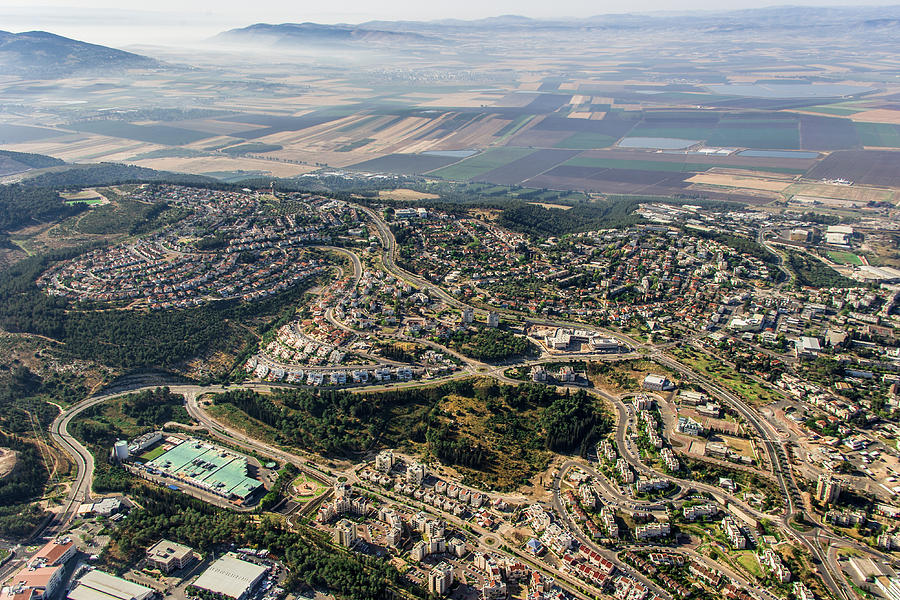 Al-A’maq/HaEmeq (the gorge) is where God judges tyrants. Even Gog is judged on his way to Jericho in al-Ghour (the gorge) where the armies of Hammon-Gog are buried near the Dead Sea, the very gorge that split east from west.

Interesting how God ordains the names to mean ‘split’ and is where we get Pesach (split) as the Jordan was the ‘split’ and the Red Sea another ‘split’ … a gorge was always the separator between two warring parties and in the case of the Jezreel, it splits between north and south.

This is why one finds in the Bible, God judges the “northern army” and Gog’s hordes come from “the north quarters” while Christ in Zechariah 9 comes with “the whirlwinds of the south”.

Splits is what we will see commencing in the next couple decades. Even Europe will split between north and south with the south being the ‘ships of Chittim’, the good guys from the regions of the Mediterranean who come against Antichrist’s northern hordes.

Until then, the world will continue to err leading us all in that direction. In 2015 we warned against the complete eradicating of ISIS stating: “The Caliphate wars will not be over with ISIS, but this is only the beginning.”  We added:

All this mess happened as a result of removing Saddam, the essential plug which kept the dam from cracking. It is therefore crucial to reinstall another Saddam, a Sunni, not a Shiite. That or else break up Iraq into its three original provinces if and when ISIS is defeated by Iraq. The U.S. pulling out of Iraq without solving the issues of oil in Mosul and allowing Shiites to rule over Sunnis was a catastrophe.

Now we have Badr Organization, Asai’b Ahl al-Haq (AAH), Kata’ib Hezbollah and various Sadrist elements. They are all Shiite. Certain militias such as the Badr Organization and AAH appear to be taking direct orders from Tehran [Iran].

From Tehran’s perspective, its intervention could even provide more leverage on other issues, including the nuclear negotiations. “The world has understood the reality that the first country to rush to the help of the Iraqi people in the battle against extremism and terror was the Islamic Republic of Iran,” Foreign Minister Mohammad Javad Zarif said in December.

Now Iran, a state which sponsors terrorism is fighting a war on terror? No. It is fighting to consume much flesh, to expand into Iraq, Syria and the Middle East.

Pastor And His Wife In Ohio Found Guilty Of Pimping And Sex Trafficking Children
Rodrigo Duterte, The President Of The Philippines, Declares: ‘I Want Homosexual Marriage For The Philippines. I Even Once Desired To Be A Homosexual And I Did Not Know If I Was A Guy Or A Girl.’
Follow