You are here: Home › Report: In Spite Of Trump’s Claims, There Are Few Links To “Antifa” Among Protester Violence 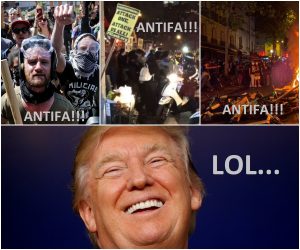 Trump and many on the American right have talked very boldly about how “antifa” has “infiltrated” the protests and is driving the violence. However, according to Reuters, there is actually very little evidence of links to “antifa” in said violence.

The U.S. Justice Department moved swiftly to bring federal charges against 53 individuals accused of violence during nationwide protests that swept across the United States calling for an end to police brutality.

Attorney General William Barr promised a crackdown on members of the anti-fascist movement known as antifa and other “extremists” he blamed for helping to drive the violence.

But a Reuters examination of federal court records related to the charges, social media posts by some of the suspects and interviews with defense lawyers and prosecutors found mostly disorganized acts of violence by people who have few obvious connections to antifa or other left-wing groups.

Reuters reviewed only federal cases, both because of the allegations by the Justice Department about the involvement of antifa and similar groups, and since federal charges generally carry harsher penalties. In some of the charging documents reviewed by Reuters, no violent acts are alleged at all.

The Department of Justice declined to comment on Reuters’ findings and referred to an interview that Barr gave to Fox News on Monday. He said there that while his department had some investigations under way into antifa, it was still in the “initial phase of identifying people.”

Looting and violence broke out at some of the hundreds of largely peaceful demonstrations over the past week sparked by the May 25 death of George Floyd, an African American, after a white Minneapolis police officer pinned him with a knee to the neck for almost nine minutes.

The policeman, Derek Chauvin, has been charged with second-degree murder, and three other officers with aiding and abetting.

While Barr and President Donald Trump have repeatedly singled out antifa, an amorphous movement of primarily leftist anti-authoritarians (the name is derived from “anti-fascist”), as a major instigator of the unrest, the term does not appear in any of the federal charging documents reviewed by Reuters. It is possible that more evidence could emerge as the cases progress.

Only one group was called out by name in a federal complaint: the so-called boogaloo movement, whose followers, according to prosecutors, believe in an impending civil war.

Hate group experts say boogaloo’s followers are largely an assortment of right-wing extremists. Prosecutors alleged three men affiliated with “the movement” plotted to set off explosives in Las Vegas in the hopes of touching off rioting before a protest. (source)

This is an interesting but not unsurprising observation.

What is “antifa”? I hate using the term, because like “nazi”, it tends to give one to associate discussion in a particular funnel outside of the totality of the matter.

“antifa” means Anti-fascism. It is NOT a centralized movement, and rather is an idea that has no leader. It is the opposition to fascist movement that consolidate state and corporate power and use it to crush people. By contrast, the National Socialism movement is both centralized and decentralized. It is the former in terms of Germany under the Reich in the 20th century, but it is also a decentralized concept based on ideas of German and pagan nationalism that was later influenced by the Kaballah (as is noted by Rudolph von Sebottendorf) and thus represents both aspects.

Anti-fascism and anti-fascists were arguably the main political bloc leading the opposition to Hitler and National Socialism. There was no “leader” of “antifa” just like there is no leader today, but individual groups dedicated to a certain principle of opposing the eugenic ideas that in the 20th century were coming from Germany and once again are rising today.

What could we be seeing here?

Remember the Euromaidan in Ukraine? I noted here on Shoebat.com that it appears the purpose of the event was to indeed cause a political revolution in Ukraine in preparation for an inevitable Germanic march to the Volga basin to secure oil, as what happened in World War I and during World War II in the most important battle of the war, the Battle of Stalingrad, that decided the fate of Germany. The US and Germany in backing a revolution in Ukraine and supporting National Socialist proxy soldiers is preparation for history to repeat itself in an attempt to prevent another Battle of Stalingrad scenario. It is also the reason why Russia is militarizing the Arctic so aggressively- because she knows she cannot rely on her Volga deposits and since she may lose them- and would lose a war -is trying to ensure a second Arctic line as a backup.

It cannot be definitively proven from this article or another, but the suspicious is that the insistence on calling ‘antifa’ a “terrorist group” and associating violence with her is not because of a real matter, but rather to discredit completely the concept of anti-fascism before another major war starts. Since the US is backing Germany, who is returning to National Socialism, by killing the concept of ‘antifa’ now, the idea would be that anybody who does try to rise up against the new National Socialists would immediately be discredited and attacked by people as “one of those Black Lives Matter/domestic terrorist types who hate ‘our people'”. Such an approach fits in perfectly with the NATO/Gladio “strategy of Tension” idea that has endured since the end of the Second World War.

Make no mistake, there are no good sides on either of these protests. The left is not different from the right in essence as they both conclude that eugenics is the ‘answer’ to their problems, and both will cause horrors. What is of note here is that what one may be seeing is attempts to interrupt historical patterns used to fight back in real conflicts, and that the insistence on calling ‘antifa’ a terrorist group is about establishing more control over people than ever before in the name of bringing order and fighting against terrorism that was manufactured for political purposes by the same people proposing a solution to it.