You are here: Home › Germany Moves For Join Cooperation With France To Do ‘Stabilization’ Operations In Mali 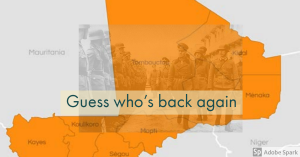 German Foreign Minister Heiko Maas called for an international effort to stabilize the Sahel region in Africa. The area has seen escalating regional violence and terrorism in recent years.

Maas pledged that Germany would continue and expand in its commitment to the United Nations’ MINUSMA peacekeeping missions in the West African nation of Mali.

“We are calling on other UN member states to participate in the MINUSMA,” Maas told an online meeting of the UN’s Security Council. The situation in Mali “continues to pose a threat to world peace and international security,” he said.

France and Germany are currently working on a joint initiative in the area.

“Germany and France have launched a partnership for security and stability in the Sahel, in which the EU will play a leading role. Together, our two countries work hand in hand for peace and security,” he wrote on Twitter after the meeting.

The German parliament in May voted to extend participation in the MINUSMA mission, considered one of the most dangerous peacekeeping operations in the world. It was set up in 2013 and comprises 12,000 soldiers and 1,700 police officers.

The US withdrew troops from the mission early in the year.

Terrorists groups regularly attack civilians and security forces, Maas said, emphasizing the risk not only to countries in the area but also to Europe.

“However, our international efforts will only succeed if all Malian actors also work together for a better future of their people,” Maas added. (source)

Mali is in a nation that we have followed at Shoebat.com for some time. It is a part of the Sahel region and is a “former” territory of France, with “former” in quotes because while Mali is in a technical sense a “free” nation, her currency is the West African Franc, which due to its being issued by the Bank of France, is still directly controlled by France by way of currency manipulation. Indeed, the notorious quote attibuted to Meyer Amschel von Rothschild that ‘give me control of a nation’s currency and I care not who makes the laws’ is absolutely relevant since power over the means of exchange gives complete economic control and is the basis of political control.

Mali, like Nigeria and Togo (Dahomey) is s regional power in Africa due to her location as a crossroads between the Sahel, sub-saharan Africa, and the Atlantic as well as points north through the Sahara toward Europe. She is also a very resource rich area as is indicated by her name, for “Mali” in Arabic means “wealth” and is comparable to “Puerto Rico” or “Costa Rica” in the Spanish American context.

Germany already extended her stay with the Bundeswehr in Mali until 2021 in the name of fighting terrorism earlier this year (source) after discussions from 2019 about talk of establishing a “long-term” presence in the country in order to maintain stability (source). Interestingly, about two weeks before France and Germany announced their joint cooperation, the US advocated at the UN for a drawdown of MINUSMA, the UN peacekeeping agreement between the US and Europeans for Mali, which France and Russia both angrily rejected.

Cherith Norman Chalet, the US deputy ambassador to the UN Security Council, said it was “time for this Council to begin developing an alternative approach to address growing instability in Mali.”

“We must recognize that peacekeeping missions are not the answer to growing terrorist threats in Mali,” she said.

Washington, which is considering reducing its own military presence in Africa, has been regularly questioning the usefulness of the UN peacekeeping mission to Mali, known as Minusma, since 2018.

The 15,000 Blue Helmets have an annual budget of a billion dollars and have been deployed in Mali since 2013.

Wednesday’s declaration sharpened the US position, with the envoy saying Minusma should stop trying to enforce the implementation of a much-violated 2015 peace accord and focus instead on “the mission on protecting civilians.”

She called on the Security Council to “develop a new approach that disrupts the status quo” by June, when the peacekeeping mission’s mandate comes up for renewal.

Chalet also demanded sanctions against “individuals and entities on all sides of the conflict, including government officials and armed group members” who have violated the peace deal.

The French ambassador to the UN, Nicolas de Riviere, told the Security Council that “Minusma remains a very important tool for us. We will continue to need and to support Minusma.” (source)

Why would the US care about scaling down operations, and the French and Russians react so angrily in the name of “stopping terrorism” when all of them- France, Russia, and the US -are known to use terrorism as a tool of public policy?

France and Russia are historical allies and occasional enemies. One may point to Napoleon and his failed invasion of Russia, but France and Russia often culturally influence each other, and they use each other to keep German nationalist ambitions in check. Likewise, Germany often allies with France during her periods of expansion. this results eventually in a fight between Germany and Russia, and a split within France with half supporting Germany and half opposing her. In other words, what happened during the Second World War.

France needs West and Central Africa to remain relevant in the world. She knows this because she has nothing else to offer and without Africa she has no resources to draw from is at the mercy of the UK and Germany. Germany is going more into Africa because she will do what she is efficient at, which is taking resources to militarize herself and do nothing from the people, and she is allying with her “frenemy” the French to do this. Likewise, Russia supports the French position but is silent on the German one because she wants to keep France close to her while hoping to work with Germany so as to hopefully delay or mitigate a conflict with her such as she has endured for centuries of history.

The US holds in a sense the “best hand” in the game because she is not bound by landscape and can retreat as she pleases, but is only hoping to look out for herself, as it was she who rebuilt Germany after World War II and wants to control her, and since she knows that Germany is a real threat, does not want to fight her again nor does she want to risk Germany attacking her a-la the line of “dirty bomb” or some other strategic form of terrorism, for it would not be uncharacteristic of Germany to do this and she possesses the hatred of the US and the intellectual capacity and resources to successfully perform such a task.

What we are seeing right now is another “scramble for Africa” but in modern times. The US, France, Germany, and other nations are not looking to help Africa or Africans, but to take what they can from Africa because they are building themselves up and setting up for a conflict. There is too much evidence to deny that such is taking place, and right now it is a race to get what they can before the guns come out and war starts anew but with modern technologies.

Hindu Nationalist Terrorists Take Christian Teen, Crush His Skull With A Rock, Then Hack Him To Pieces With Machetes For Being A Christian
The ‘Warlord’ That Has “Taken Over” Part Of Seattle Is A Complete Scam
Follow